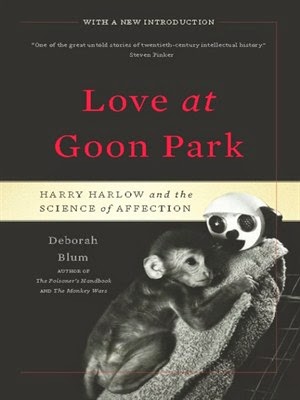 Ten points about the revealing book Love at Goon Park: Harry Harlow and the Science of Affection by Deborah Blum (and h/t Jackie Danicki for recommending it):

1. I hope you didn’t spend Mother’s Day cut off from all affection and deposited at the bottom of a small “pit of despair” in a laboratory.

You’d think that’d go without saying, but as this book reveals (to the likely shock of most people like me who are too young to remember the 60s), the idea that maternal (or other) affection is vital to normal childhood psychological and physical development was not only unconventional but actively derided as mystical and frivolous in the early twentieth century. It took psychologist Harry Harlow -- himself a screw-up as a husband and father but an avid alcoholic -- and the terrible, loneliness-inducing experiments he did on monkeys circa 1960 to transform the consensus of psychologists on this topic.

2. The frustrating thing about this strange tale is that of course mothers already knew the truth, by instinct and common sense! See that as a vindication of conservative traditions, feminine insight, or liberal compassion as you choose, but it sure doesn’t make (“soft”) scientists look good.

3. Cold, clinical, stoic men (who in many other contexts I’d be the first to laud) were clearly a problem here and a very gendered one given the demographics of the profession of psychology back then -- yet feminists were pissed at Harlow by the time his research was popularized and (later) accepted by his manly profession, since the last thing activists at the height of the Sexual Revolution wanted was someone coming along and vindicating the indispensability of mothering and motherhood, not to mention revealing it to be instinctual.

4. Poor Harlow was also getting denounced by animal rights activists by the 1970s. His insights have probably helped prevent the abuse of many members of this planet’s dominant and most awesome species, homo sapiens, but there’s no denying his monkeys suffered -- though to his credit, he always attempted to repair them psychologically after damaging, since repair was the ultimate goal of all his research.

Given all the good that has likely come from his research, seeing him denounced by feminists and animal rights activists whose anger he did not foresee pains me in much the same way (though to a far lesser degree) as do the denunciations of the late agricultural scientist Norman Borlaug by anti-biotech activists and, more recently, some paleo diet adherents. Borlaug’s work boosting rice and grain yields (around the same time Harlow was becoming a public figure) may have saved a billion lives, but to some too young to remember mass famines he is just a person who encouraged too much carb consumption.

5. Scientists, risky as it is to say this in educated circles, are prone to bias and faddishness and herds of them can get things wrong in like fashion for surprisingly long periods of time, all the while denouncing their critics as Luddites and mystics. Take for example this study hinting that scientists are non-coincidentally prone to get numbers in their measurements that are just strong enough to warrant announcing an interesting result. Tiny amounts of unconscious bias in just the right places can make a world of difference, as psychologists should be the first to realize.

The mushier the field -- or by contrast the more complex and arcane the math -- and the more room there is for chicanery and simple honest error. But try telling people that if you don’t have a Ph.D. or are on the politically-incorrect side of some issue.

6. Love at Goon Park should not be mistaken for Kyle Smith’s highly amusing novel Love Monkey, in which I am not thanked but in which I think there’s nonetheless a joke I gave him, about childbirth being a bit like an Alien movie. Not that I’m complaining all these years later. And now is no time for Alien jokes, not the week of brilliant Alien-designing artist H.R. Giger’s unfortunate passing, strange dark little alien creature though he was himself.

7. None of the psych experiments described in Blum’s book involve a hypno-cat, but this brief video clip does. Beware.

8. Even more important in a way than affection (or monkeys) is the broader implication of Love at Goon Park that no matter how many times conventional wisdom changes radically, people keep assuming it won’t happen again and that only uneducated crazy folks are opposed to the establishment view -- no matter how manifestly-insane that establishment view will look in retrospect. Once more: beware.

9. There’s plenty of bunk that gets filed in the “mind-body medicine” category, but Harlow’s work is a reminder that minds and bodies are of course connected in some ways. Perhaps I should take more pride in having introduced the couple who founded the Cuddle Party movement, even if I never went to one myself and am not 100% comfortable even with the idea of massage.

10. More broadly, there’s much to be said for avoiding myopia by bringing to bear multiple philosophical approaches, even if you have trouble keeping the moms and the scientists, or the poets and the accountants, happy at the same time. With that in mind, I will attempt a sympathetic reading in my next blog entry of Jedediah Purdy’s rather “holistic” 1999 book For Common Things -- despite all the negative things he says about libertarians.
Posted by Todd Seavey at 10:52 PM