Dionysium 11/11: For Which Puritans Are We Least Thankful? 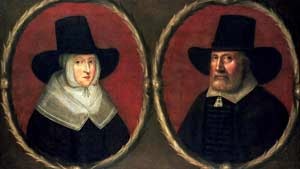 •Vandals out to defend Judaeo-Christian tradition painted the word “blasphemer” on the home of one of our Nov. 11 Dionysium speakers over his bawdy rewrite of Genesis.

•Islam has inspired totalitarians and terrorists abroad and what some see as “creeping Sharia” in U.S. enclaves.

So this holiday season, the Dionysium asks: “For Which Puritans Are We Least Thankful?”

Making the case against the three factions noted above will be, respectively:

It’s all moderated by straight-laced New England extract Todd Seavey, with ample Q&A and audience discussion from you, Monday, Nov. 11 (8pm) at: