Comic Con Behind, Geek Films Ahead 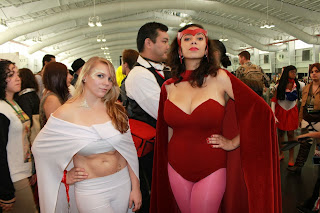 •Face front, true believer!  Did you know Scarlet Witch’s hex fields are loci of improbability (as seen in the nearby photo)?  That’s only one of the things you might have learned if you went to New York Comic-Con this weekend, as did the editor of the site BleedingCool.com, which posted that cosplay pic. 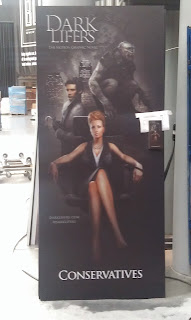 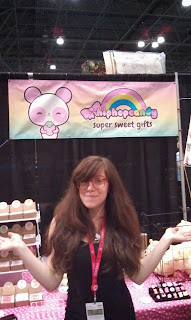 Since I didn’t actually attend, the other pics you see in this blog entry are merely ones I took during the set-up day, Thursday, prior to the real con – including a shot of the faux-set for what appears to be a major new South Park project and the booth of Japan-influenced knickknack-seller Hip Hop Candy, run by Olivia Lilly, who together with Matt Brandenburgh got me in.  Among other things, Hip Hop Candy now sells “Unicorn Poo” perfume (I cannot promise it smells like real unicorn poo).

If that’s not cute enough, this entry also contains a photo pointed out by Jacqueline Cohen that shows a unicorn with a dog sitting on it.

Cuter still, in this clip a single, unbroken shot of very rambunctious kittens lasts A HALF HOUR. 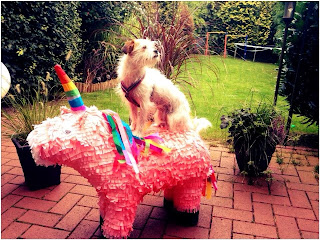 •If it’s more-serious geekery you seek, though, I see November brings three major nerd films, the controversial Orson Scott Card’s Ender’s Game, the second Hunger Games film, and the second Thor film.  I cannot promise any of them will be as interesting as this month’s spectacular Gravity (with its silent absence of Mission Control bureaucrats both welcome and eerie) and mediocre Machete Kills.  The two films have far more in common than one would have anticipated -- and you would never guess which one has the cameo by space/travel/etc. entrepreneur Elon Musk (who was also in an Iron Man movie). 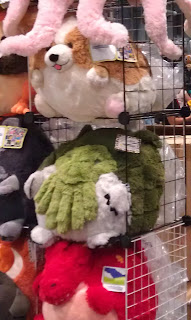 •The second of three Hobbit films comes out in December, but you can already enjoy this mind-bogglingly large Lego version of the Battle of Helm’s Deep from the second Lord of the Rings movie.  Less fun is this tragic story of a real-life “Hobbit home” vs. all-too-human government (h/t Andrea Pisani, Jesse Forgione).

And speaking of fantasy, shouldn’t they use this rock classic in a Game of Thrones promo at some point, tone be damned?

•Finally, if all this leaves you wanting to plan your 2014 and 2015 nerd-movie-going, you already can, with the help of my expanded list, below, of what I think’s relevant for the next two years (if you’re not boycotting Joss Whedon or anything).

Oh, and here’s free marketing advice for the people doing the new Godzilla: Due to what I think may be the horrific, metallic wail of industrial- and farming-sized “grader blades” being bent back into shape, numerous people around the world have posted clips of terrifying noises echoing throughout their towns, thinking the world is coming to an end.  Well, it happens to sound like Godzilla’s distinctive roar, too, so I say: do ads inviting people to listen for Godzilla’s approach and post videos of warning if he nears!  Instant viral campaign!  I got a million of ’em.  (That whole earthquake/Fukushima reactor situation ought to create some sort of mutant-fish-watch opportunity, too.  It’d be no more tasteless than Gilbert Gottfried.)