10 Notes About Public Opinion (with X, Blondie, leaves, and meat) 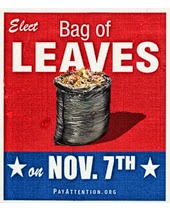 We mustn’t be too quick to assume we know sane, moderate public sentiment from crazy fringe ravings.

1. That joke Senate campaign poster you see nearby for candidate Bag of Leaves (which hangs at the bar on my corner) is supposed to depict an electoral worst-case scenario.  I think even non-libertarians might agree with me right now, though, that a legislature made up of bags of leaves sounds much less dangerous than what we’ve got.

During the #ShutStorm (as I dubbed it on Twitter -- follow me for additional hijinx!), government will attempt plenty of the usual bullshit designed to make us think it’s an essential institution, like park rangers being told to make life as hard as possible for visitors.  (I had heard a few years ago that one of many disturbing things about the Obama administration was its talent for turning offices never before politicized into arms of campaign propaganda, including park rangers.  Now I suppose that may be bearing fruit.  This administration is evil -- but then, they all are.) 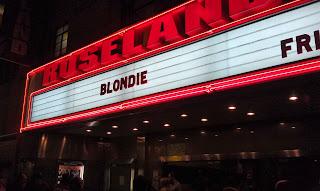 The less-panic-inducing truth is (A) shutdowns are common; (B) we can’t afford to reopen this debt-saddled government, not even close; (C) even failure to raise the debt ceiling is of no greater consequence than the slo-mo fiscal disaster we’re experiencing by routinely sinking deeper into debt; (D) and 83% of the government remains open, so we’re just shutting Mt. Rushmore to private viewers and so forth – even while, for example, the DEA goes right on smashing drug users.

Don't be a sucker and think that contrast is caused by haphazard Republican cuts or something.  This is government punishing the entire populace for having the audacity to disobey it and question its role.

2. Also above is the Roseland Ballroom marquis as it looked when I saw Blondie and X perform there a few days ago.  X’s John Doe introduced the song “The New World” with the apt dedication, “This song’s for our stupid government.”  Showing a bit more regional pride, Blondie later did a bit of “No Sleep ’Til Brooklyn.”  (In fresher alternative-rock news, today’s also the scheduled release, last I knew, of the second album by Siouxsie-like Anna Calvi, who did this a couple years ago.)

3. A more complex, long-term view of government and our possible doom was elucidated the night before X and Blondie by David Stockman (who fears the Fed’s influence has rendered the stock market irrational), and the biggest surprise about that was that host Victor Niederhoffer weighed in to say that he thinks Stockman is wrong about everything, that Stockman is wrong to distrust the wisdom of optimistic investors, that doomsayers like Stockman are a perennial problem, and that anyone who listens to Stockman would go bankrupt several times over.

Yet the crowd and I still liked Stockman.  He’s surely wiser than IMF head LaGarde, who says “Looser monetary policy can also help” in the rough times ahead.

(I was also reminded by the awkward exchange of the first time I spoke at Niederhoffer’s Junto years ago, about cigarettes, not arguing for banning them but merely that libertarians, like everyone else, ought to keep in mind how deadly-dangerous they really are rather than pooh-poohing them simply to undermine the threat of regulation -- an irresponsible posture that would only serve to encourage people who think only regulation can foster safety.  Niederhoffer rose afterwards to call me and my ACSH colleagues tools of the FDA -- though I still enjoyed myself.)

5. People like to imagine they know roughly what their neighbors (be they allies or no-good bums) are really thinking, but opinions vary in surprising, unpredictable ways.  Heck, the Who’s Pete Townshend doesn’t even like the music of Led Zeppelin -- and there is disagreement on how to keep razors sharp.  We know so little for sure, really.

6. For a rare glimpse of someone with the courage to subtly nudge a probably-liberal, small-d democratic audience in a direction completely at odds with popular sentiments, namely something akin to a hybrid of anarchism and monarchy, you might watch this clip of (Seavey-era Brown alum) Mencius Moldbug in action, at the TED-like BIL Talks.  Perhaps Brown harbored more non-Marxist political currents than most of us realized at the time.

7. Other fringe views will be examined in objective and scholarly fashion Tuesday night at 6:30 at a talk by Reason’s Jesse Walker, concerning his book on conspiracy theories, United States of Paranoia.  As he recounts, the tactics of those who fear conspiracies often come to resemble those of the conspiracies (real or imagined) that they fear, whether it’s the paranoiacs who are on the fringe and the conspirators who are in power, or vice versa.  He’s just written an article showing certain parallels between the thinking of WikiLeaks today and the covertly-acting, whistleblowing Wobblies of a century ago.

I don’t want to become like conspiracy theorist Alex Jones, but here, for instance, he and his coworkers sound closer to sanity as they react during the tragic shooting of that crazed DC motorist than most of the media did.  Are the millions who listen to him that much crazier than, say, people who continue to trust the BBC after it, uh, creatively edited a soundbite to bolster the claim agents of Syria’s government were the ones using chemical weapons?

Call out the crazy folk, by all means, but remember how often it’s the pot calling the kettle black.

8. So often, anger seems to spring from a military-like desire to control all variables -- government, ever wary of its illusion of mastery being dispelled, becomes the all-clutching fist accompanying the master-narrative writing-hand of the ostensibly all-knowing media.  It’s not surprising they get along.  They have a common interest in purveying the message “All’s well, as long as you keep listening to us.”

9. By contrast, I couldn’t help noticing the complete absence of Mission Control from the NASA thriller Gravity (which you absolutely must see in 3D for once).  I have no doubt that even now leftist op-eds are being penned saying that defunding NASA would be as cruel as stranding George Clooney and Sandra Bullock in outer space -- but the film is an intense, unsettling look at individual survival skills instead of heroic bureaucracy, and in that way much more like a lot of classic loner-hero sci-fi.

And the truth is, no matter how much you might want government to fund only the cool things you love (or think you do when you don’t have to pay for them yourself), it will pay for all the other stupid stuff as well (like making radical-Islamism-defenders advisors to the Department of Homeland Security).  The so-called shutdown hasn’t stopped DHS or NSA chugging along.

10. But instead of heightening the politically-combative rhetoric during the ShutStorm, maybe it’s the perfect time to step back from politics and debate something completely different -- like “Should We Eat More Meat?”

And so we shall (we being paleo diet advocate John Durant, food historian Allen Salkin, and moderator me), Monday, Oct. 21 (8pm), exactly two weeks from now, when I moderate the next Dionysium gathering at Muchmore’s in Williamsburg.  Join us (RSVP on Facebook if you like).

Maybe no one will argue about politics all night.  But I may monologue.
Posted by Todd Seavey at 7:46 PM