Usually, when I mention my ninety-nine year-old grandmother, it’s in a spirit of optimism and wonder, as a reminder of how much things can change in a single human lifetime, but on a more pessimistic note, imagine if you’d been an adult one year prior to her birth – that is, in 1913, exactly a century ago – and some of the naively optimistic thoughts that might have gone through your head:

•This new "Federal Reserve" should stabilize the economy
•This small and rarely used new federal Income Tax will help the central government balance its books
•Some really fun occult ideas are percolating in that German group called the Thule Society
•Widely-admired editor Mussolini over at Avanti! magazine is a great speaker
•With women about to get the vote, sanity and compassion are coming to politics
•Thanks largely to them, we’re very close to legal action that will end the scourge of alcohol
•There’s peace in Europe
•And the Duma is even introducing reforms in Russia!

Conclusion: THINGS ARE LOOKING UP!

All right, it hasn’t been all bad since then, but tomorrow [CORRECTION: Speaking of optimism, let’s make that Monday]: a look at the old ways, with David Friedman (as part of this blog’s “Month of Law”).  And nearby in today’s entry: my video clip of the kooky lights they had on the Empire State Building on New Year’s Eve, plus a picture I took of my favorite silly band sticker in the bathroom at Otto’s Shrunken Head, where Rew Starr, angry New Age rapper Adi Love, and others performed that night. 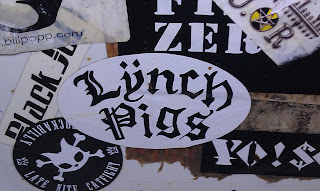