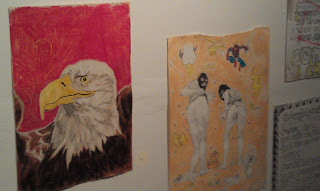 The Phillips Foundation gave me a copy of Fast and Furious: Barack Obama’s Bloodiest Scandal and the Shameless Cover-Up by Katie Pavlich, and I later gave it to a gun aficionado I know, planning to track its location and take him down if he misuses the book, but then I got distracted by other stuff, so, eh, you know, whatever.  (In fact, I passed it along at an art show featuring odd works by Max Eisenberg such as the ones seen in the nearby photo.)

Seriously, though, even if you thought it was in theory a good idea for the U.S. government to sell lots of guns to Mexican drug cartels (many that went on to be used in actual murders) in hopes of tracking them later and busting their users (not a manifestly impossible thing), and even if no net increase in deaths occurred as a result of Operation: Fast and Furious (a possibility I suggested to Pavlich myself, since every good gun rights defender knows that guns that can’t be bought by Route A will likely just be bought via Route B anyway), and even if you’re naive enough to think that Attorney General Eric Holder would never lie, you should be troubled by the fact that the government does not in fact seem to have made any serious effort to track the guns later.

As Pavlich recounts, one agent was so alarmed by this neglect that he stuck a tracking device of his own in one of the guns, though it later stopped operating.  Making matters worse, it appears that even while the Obama administration was actively encouraging gun dealers to keep selling to Mexican criminals – even telling the dealers not to be alarmed when they dutifully reported their concerns to the government – the administration was seizing the opportunity to publicly condemn the very same flow of guns to Mexico, implying that gun dealers cannot be trusted (and your government can).

Given the lapdog press’s eager role in sanitizing all this, I’m rather pleased to see Fast and Furious whistleblower John Dodson suing the New York Times for libel.  Obviously, the press has the right to be wrong, and few such suits succeed, but I’m not against libel laws when the mistakes are sufficiently knowing, vicious, and damaging.  Such suits may be an important tool of resistance, given the increasingly disturbing and monolithic role played by the establishment press in aiding the government in its crimes – and given the press’s ever more brazenly partisan nature.

(There was much joking online, for example, about the contrast between the press’s immediate post-election freakout over Rubio’s agnosticism about creationism and their total silence over Obama’s own agnosticism, worded in almost the same way, on the same topic.  Luckily, that’s a mostly-silly issue that doesn’t tend to get anyone killed.  The government can’t stop evolution, not even with a full-fledged nuclear war.)

Polls and punditry suggest the left loves it when Obama stops compromising and “plays hardball,” though they shouldn’t kid themselves that this just means being hyper-idealistic.  It may also mean things like holding the threat of releasing scandalous info over Petraeus’s head back in September to get him to soft-peddle his criticism of the administration over the Benghazi attacks.

Government is bullying, secrecy, ineptitude, organized crime, inefficiency, and the public’s misplaced philosophical hopes all at the same time.  We would be better off without it, whether here or in Latin America.  (Of course, sometimes you can’t blame cops for deviating from protocol a bit, as in this darkly amusing 911 call.)
Posted by Todd Seavey at 12:48 PM