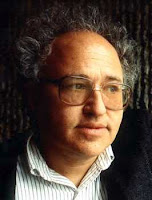 It’s Monday.  Tonight (after spanning the political spectrum with a tour of the New York Times and a 7pm stop at Sanctuary Bar, where some folks will toast the late Andrew Breitbart), I will head down to old LOLITA BAR (266 Broome St.) to host the previously-noted talk there by anarcho-capitalist economist DAVID FRIEDMAN at 9pm.  Join me!  Together we will rule...nothing.  No one should rule.
Friedman may be the writer with views closest to my own, so of course I will take it as a terrible personal slight if you do not attend.  Besides, his talk on “Global Warming and Other Good Things in Our Future” will give you reason to welcome tomorrow – and will defy the usual right-vs.-left analysis.
A dozen more thoughts about politics, the past, and the future:
1. I recently scoffed at the decades-ago warning that robots would end up producing all our music – yet (as Jake Harrison points out), tiny computer-guided quadrotor flying-drones have now been programmed to perform the James Bond theme song.  The lab that built them, called GRASP, is looking more like SPECTRE with each passing day, and plainly we are all going to die in some way resembling this video clip (you think I’m joking).
2. If the future brings a moon colony, I only hope it looks more like the one Gingrich imagines than like the one in next month’s eagerly-anticipated film Iron Sky, about a Palin-like president fending off lunar fascists.  Perhaps Friedman can address this issue – or give us hope that the moon will end up having revolutionary anarcho-capitalists on it, as in Heinlein’s The Moon Is a Harsh Mistress.
3. To learn how law works on Mars, by contrast, you may need to join me in seeing John Carter this weekend, in theatres a full 100 years after the original novella – and somewhere out there, I hope a 105-year-old fan who read it when it came out in 1912 is complaining that they’ve gotten something wrong in the film.  (Had things gone as once planned, by the way, it would not have been Disney who first released a theatrical John Carter but Warner Brothers animators back in the 1930s – before Snow White.  We can only imagine how that might have altered the history of animation.)
4. Santorum does not seem much concerned with forward-looking things like robots or off-world colonies.  On the other hand, economist Don Boudreaux wrote this criticism of those who, among other things, want the government to mandate payments for contraception: “Here again is another instance of ‘I want what you earn’ lauded as being enlightened, while ‘I want what I earn’ [is] criticized as being backward.”
(By the way, do many leftists feel shame living off rich parents’ trust funds – much like that felt by welfare recipients – all of it sublimated as anger?  That would explain a great deal.  Being a parasite is a fast track to self-hatred, after all, and one obvious response is to seek some way of claiming the moral/political high ground.)
5. Since I started out complaining about Santorum, though, I should post a better link to that hula hoop chick I linked on Facebook as a small anti-Santorum pro-sexytime protest.  I deleted it on Facebook not because Santorum pulled off a belated quasi-tie in Michigan but simply because that other link was wonky (in a non-political sense of the word).
6. Here she is hooping to the Yeah Yeah Yeahs of Williamsburg, future site of Seavey-hosted bar events.
7. Speaking of protests against right-wingers, I find myself in the odd position, years after Brown, of noting that a Brown Daily Herald columnist
(I mean an actual current one, not one of my friends from back in the day) makes a valid criticism of Ron Paul – namely that he is sometimes more federalist than pure libertarian (but he’s about as close as it gets).

8. And Rasmussen polling last week, for what it’s worth in a fast-changing environment, showed Paul as the only GOP candidate who beats Obama in the general.  America is not the obstacle to dismantling big government at this point.  The GOP primary voters are.
(My intention to vote for Paul in next month’s New York primary did not stop me from enjoying the realistic gung-ho action film Act of Valor, though.  Ah, the sweet buzz of the Gatling-style guns on the rescue boat.)
9. By contrast, I am not pleased – nor should any purported fiscal conservative be pleased – by this video of Romney crowing, ten years ago, about hitting up every government agency there is for Olympics subsidies (pointed out by the aged and wise Corie Whalen).
Come on, if you claim to be some sort of conservative, you have to vote for Ron Paul, or you’re just wrong.
10. Another Ron Paul ally, the controversial Lew Rockwell, does not co-own the Cato Institute, says David Friedman in a comment found below this post, though you could be forgiven for wondering who does control Cato after all the press coverage of its board of trustees in-fighting over the past few days.  I hope it all works out OK.
11. Interesting sidenote: the Cato Institute is named specifically for the eighteenth-century letters written under that pseudonym opposing the Federalist push for the creation of a stronger central government under the Constitution – and that pseudonym (also used a few decades earlier in England) was in turn an homage to Cato the Younger, who defended the Roman Republic against the rise of the Caesars, not an homage to the (now more famous) Carthage-fearing war-monger Cato the Elder.
So many labels in politics are fraught with glass-half-empty, glass-half-full ambiguity and must be placed in context (like the term “neoliberal,” for instance, one of many that cause more strife and confusion than they’re worth).
12. Finally, from Lefty Leibowitz, a reminder that our culture’s peril and promise are often intertwined: “Fact of the day: Operation Ivy was not originally the name of a California punk band.  It was the code name for the first hydrogen bomb test.”
May tonight’s bar gatherings be more punk than apocalyptic.  See you shortly.
Posted by Todd Seavey at 2:14 AM

If you object in general to Heritage/Romney/Obama-care with its mandate, a coherent case can be made against it on the grounds that it forces people to enter into contracts they otherwise wouldn't have made. But it has nothing to do with the question of whether birth control should be included in the mandated program if such exists.

The Boudreaux/Limbaugh position above objects to the transfer of money from the rest of the participants in the program to the recipients of the birth control benefit. In fact, the inclusion of the benefit seems to me likely to be making the mandated system *fairer* by lessening the subsidy that young females are forced to provide to everyone else. (If by fairness we mean removal of enforced, systematic subsidies.)

Now I do not know that as a fact, since I don't have the relevant data. However, I suspect I am right about this point, and it seems to be it does
in fact negate this particular objection to the birth control part of the discussion.