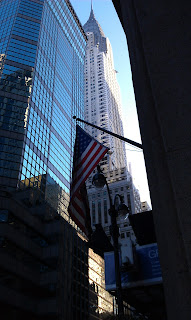 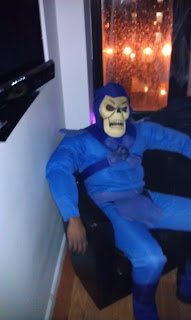 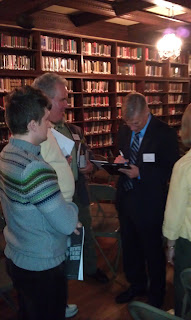 My friend Michael Malice (a) admits that he aspired to be a supervillain when he was young (so he should be pleased I saw Skeletor at a Halloween party recently, as seen above), (b) shares my fascination with Ayn Rand devotees (such as Yaron Brook, seen in the nearby photo with Malice when we visited FEE recently), and (c) once remarked that the Chrysler Building is such an impressive human achievement, you look at it and just know there is no God.
That’s funny – and I’m an atheist – but I have nonetheless tried to extend various olive branches to the religiony folk over the years – with varying degrees of success, as I was reminded just the other day when I noticed that some dimwit Anglican priest (and blogger) in Lexington, SC named James Gibson declared me “political jerk of the year” last year, even though what provoked him was my on-air defense of monogamy, kindness, and morality (and a lot of other things I didn’t even get into) against an aggressive underminer of these things who just happens (of course) to be from a sect similar to Gibson’s.
I genuinely worry for his flock if his judgment is this poor and his partisan allegiances this much stronger than his moral discernment.
Nonetheless, despite the numerous examples I have been confronted with of secularists behaving well and religious people behaving like ghouls (and looking forward to their moral Get Out of Jail Free card from Jesus, while the rest of us make an actual effort to be good people), I am willing to concede the possibility that if you really crunched the numbers (I’ve looked, and I swear they’re pretty ambiguous), we might find that religious people (or indirectly religion-influenced people, which is an important qualifier) behave better than non-believers.
That’s a different question, after all, than whether God exists (the answer is no, except in the laughably limited sense that I must also “keep an open/agnostic mind” about unicorns or tiny talking bears living inside the Moon, etc.).  It’s also a question you can see Dinesh D’Souza and others debate live online at 6:45 Eastern at this link, in an Intelligence Squared U.S. debate.
Sociologists and evolutionary psychologists have offered theories about why religion might be morally/socially useful (as did Freud and Marx and Nietzsche in their different ways), but I have a two-part suspicion – not sufficient to make religion seem a socially-necessary thing but reason enough to examine its good points instead of simply ditching it and replacing it “with nothing.”
Basically – and I fully admit this is mere speculation:
1. I can’t help noticing how prominent parent imagery is in talk of gods.  And zoologists will tell you that “taming” is often a matter of keeping animals in a youthful state, since there are instinctive limits to youthful aggression that do not exist in adults.  Dogs, famously, are similar in many ways to wolf puppies – with all the adorable deference to pack leaders that entails.  Humans, likewise, have been described as a “self-taming” species.  For all our wars, most of the time we behave gently compared to many other species and (from what the paleontological evidence suggests) our own murderous ancestors.
And maybe thinking there’s a parent watching is a good way to get people to behave not just like proper citizens or thoughtful moral agents but literally like young siblings.
2. Furthermore, even for the loners out there, thinking of
one’s own conscience – if that’s the real source of our daily moral guidance – as a distinct (especially parental) entity, with its own “voice,” etc., is an especially helpful way for most people to order their otherwise contradictory-seeming desires.  The idea of doing things the right way may seem inevitably more powerful to those who think the idea was dictated by an invisible parent who’s always watching.  Not much surprise, really, given that we had to evolve an instinct to defer to parents – and to play nice, especially when they’re watching – or else end up like those ancient bloodlines in which siblings delighted in pushing each other off cliffs.

•••
•If, even at our best and most moral, we are therefore (by historical and inter-species standards) somewhat childlike, I will feel less guilty about wanting to go see Muppets next week.  The clincher for me was finding out Kermit now has a robot butler named 80s Robot who serves once-popular beverages such as Tab.  (Kermit may now be rich and aloof, but he’s less scary than a real frog, as this video clip reminds us.)
•Speaking of robots, last month Pagan Kennedy examined the creepy rise of essentially robot-written books about everything under the sun – including her.
•In other 80s news, Duran Duran has another video out, and while the song’s not great, the decade-swapping and gender-bending effect of the supermodels in the video is impressive.
•My parents’ Scottie, Mac, may not be a Muppet, but Mom thinks he looks a bit like Jock from Lady and the Tramp – and Mac was visited on Halloween by his neighborhood rival/pal, Biggie the Bulldog, who with his owners was making the rounds dressed in prison stripes with the words “BAD DOG” on his back.  Mom gave him a Halloween bone, but he hid it rather than chewing it.  That sort of impulse control may be just what he needs to stay out of further trouble with the law.
•By contrast, I fear that the attempts at self-policing down at Occupy Wall Street were not going well – being a bit childish is safer than forming a brutal raiding party on the next village, but it can also mean things degenerate into poor hygiene and sexual assault pretty quickly (a bit like Tom Wolfe’s account of San Francisco in the 60s).  I was hard-pressed by blogger RortyBomb last night to name real, high-quality arbitration firms, and they may be a trifling legal footnote right now, but I hope someday we can do better than trusting the smelly people who sneaked into your tent to be good kids, trusting baton-wielding cops to act compassionately, or trusting imaginary beings to sort it all out.
•And if all that wasn’t childish enough, do check out the print version of my review of Grant Morrison’s Supergods, about superhero comics, in the December Reason (on stands now) – and revisit this blog in one week for musings on the congressional Super Committee as its economy-altering deadline quietly arrives.
P.S. Also a tad childish, and noted by me via Facebook and Twitter already, was this old Jon Stewart segment for which the alleyway door to my previous apartment served as the entrance to a Wonka-esque “meat factory.”
Posted by Todd Seavey at 4:25 PM

Thanks for throwing us "religious folk" a bone in your own weird Seavey-ish way. It was actually religious folk behaving normal and in a caring way that drew me toward my "religious" experience (rather than religious folks behaving badly as this Priest was acting toward you by saying the stupid things he said about you). I am a Christian but I also really respect you and your opinions (I guess you could call me a fan), even when it tears in to my own belief system. But your words here about the Parent in the sky and how a belief in that could actually have positive effects on society (at least that is what I think you were implying) are almost theological in nature! I was pleasantly surprised to say the least.

Keep on rocking in the free world Todd!

You are a tolerant man. As a sci-fi fan, I try to be prepared for the mind-bending possibility that the secular world may have all the wrong ideas about how to live and the religious world all the wrong ideas about the cosmos (among other possible surprises, of course). Also a tad worried lately about the possible surprise that the size of government will be looked back upon as a footnote to finance laws, but a bit more on that tomorrow.