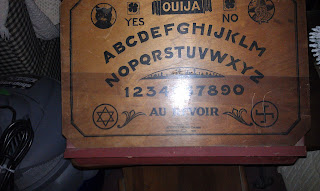 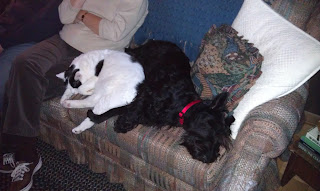 One of the items I noticed in my parents’ basement on Thanksgiving, rescued from the old farmhouse in which my mother grew up, is the Ouija board from 1920 seen nearby, startling in its juxtaposition of such mystical symbols as the Star of David and the swastika.  Together with the phrase “AU REVOIR,” they gave away the fact that either (A) the board is older than World War II, (B) it is a disturbing artifact from Vichy France, or (C) my parents are in the Thule Society (the occult organization from which the Nazi Party arose) and I need to get out of the basement before it’s too late.

I assure you, though, that there is peace not only between humans but between species in the Seavey household, as can be seen by the (non-mystical) juxtaposition of Salty the cat with Mac the Scottie in photo #2.  Are the animals nonetheless oppressed by their status as pets, you ask?  If that topic intrigues you, you might enjoy the online-audio debate on animal rights between two of my fellow libertarians, Jesse Gilchrist Forgione and Drew Rush, on Thur., Dec. 8 during the 8-10pm block on ThinkingLiberty, hosted by Tennyson McCalla [UPDATE: Debate rescheduled, alas].
Speaking of animals and the supernatural: you know that photo of a heroic dog in (or rather, near) a sunbeam that some people were recently enthusing about online?  Before they decide that God was shining a light on a (presumably soulless) hero, they really ought to consider the fact that the world is filled with photos of things in sunbeams: rocks, criminals, pieces of dung, dead cats, etc.
•••
The animals I’m most interested in this month, though, are the Muppets, and here’s an old, brief video of them doing joke screen tests for the role of Yoda.  If their new movie isn’t your thing, though, the same day saw the release of a slightly more “serious” film, A Dangerous Method, about Carl Jung and his mentor Sigmund Freud feuding over a crazy woman with a daddy complex who craves punishment – though I am by no means calling such women more mature than Kermit and company.  There is far too much tolerance for craziness in this society, and someone depicted as villainous and heartless will likely say as much in that film (and be right).
Another alternative to the Muppets, one I’ve praised before, is this catchy little puppet-filled video from the band MeWithoutYou, “The Fox, the Crow, and the Cookie,” a model perhaps for how all kids could be turned into hipsters if raised properly (instead of being beaten and featured in David Cronenberg movies).
Posted by Todd Seavey at 11:25 AM