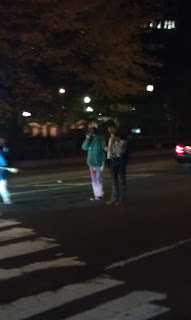 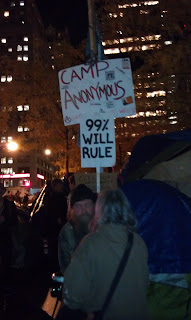 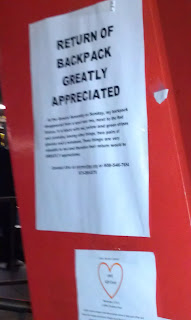 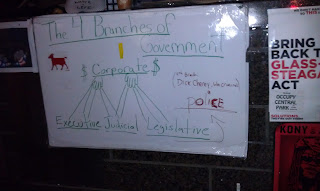 •Even though a new poll shows (in order of descending popularity) Gingrich, Romney, Cain, and Paul forming the top half of the Republican field, it may be worth listing the candidates in (rough) order of my preference, revealing a bit of my thinking in the process:

1. the conspiracy theorist who helps spread the libertarian message
2. the pot guy
3. the one accused of sexual harassment
4. the dumb guy
5. the batty religious lady
6. the smart corporatist lobbyist
7. the Santorum
8. the Democratic-administration ambassador to China
9. the flip-flopping faux-conservative from New England
I can fully understand smart-seeming Gingrich and Romney now being atop the polls – encouraging evidence, really, that my fellow registered Republicans do care about intellect – but it’s unfortunate that this almost inevitably (for over two centuries now, really) means they lean more technocratic than market-ideological, despite what the left might tell you about them.  They are faring best, and they are the least likely to excite us market ideologues, alas (still, it could be worse: Huckabee).
•Looking beyond this election cycle, though, it is likely that we’ll see politics subtly reshaped by both the Tea Party and Occupy Wall Street (the latter seen above in pics I took a few days before the OWSter from Zuccotti Park, though one shows protesters literally playing in traffic near Union Square – playing accordion, that is).  A bigger emphasis on economics is probably a good thing.  I’ll try to stick to that point rather than petty hygiene issues when chatting with the NY Salon people tonight at a dinner discussion of the OWS phenomenon (armed as well with the tiny few pages of David Graeber’s Debt I’ve now read).
I imagine most of the diners will be far more sympathetic to OWS than I am, but they might agree that it’s best dinner is on the Upper West Side and thus less likely to be disrupted by the massive OWS protest planned today for downtown (on the two-month anniversary of the Occupation, mere days after the tent city was destroyed).  Those smelly hippies are right to condemn government-bank collusion, but they had better not cause me to spill my wine.
•Actually, I’m not really a full-fledged social conservative, though
this New York Times article about a gay man whose job is (in part) teaching ninth-graders about good sex (and excusing them from the female ejaculation film if need be) is enough to make me feel like one.  Crucially, though, he’s teaching in a private school, and it is not mere cold-hearted economic analysis that makes me say this is crucial (watch now while I do fusionism): If the concern (on either side) is that kids will learn about sex in ways incompatible with the values of their parents, choosing between schools increases the odds of a match, eases exit from offensive situations, and increases the odds that the messages in class will be buttressed (and given added nuance) by the lessons conveyed back home.

Whether you’re a hippie or an evangelical, you shouldn’t have to feel as though your tax dollars are being used to “deprogram” your children when you send them away each morning.
•Another exercise in thinking beyond the usual right-vs.-left struggle: Dan Greenberg notes this Michael Barone piece likening the Tea Party to 60s radicals – in a good way.  I will also add that while their recent strong support for Herman Cain (regardless of whether it lasts) is hardly clinching proof most Tea Partiers aren’t racist, it surely ought to at least give pause to people (including my fellow libertarian Jacob Levy in a comment on this blog) who’ve pointed to studies that make it sound as if they are.  I mean, come on.  (But now, of course, the left is shifting from saying the Tea Partiers are racist...to the Janeane Garofalo theory that Cain’s essentially a fig leaf or race-traitor...to the idea that the right just loves sexual harassment, all nonsense.)  However my fellow Tea Partiers are judged next, I am sure it will be: badly.
•In the interests of political harmony, though, much like I previously urged the combo slogan “We are the 9-9-9%,” let us now bring about true fusionism by multiplying the 999, the 99%, the 1%, the 53%, 99ers, the memory of 9/11, the spirit of 9/12, and the freedom of 4/20, which gives us...uh...about 63.7 by my calculations.  So...yeah.  Think about that.
Posted by Todd Seavey at 10:59 AM