Seavey/Perry Podcast (Atlas Shrugged, Alongside Night, and God’s Not Dead)

Our latest Seavey/Perry podcast (with special guest Jackie) is about little indie libertarian movies Atlas Shrugged and Alongside Night, with a mention of religious conservative film God’s Not Dead -- plus Ferguson. (And I will link right here to an expected follow-up interview of me by Alongside Night producer Austin Petersen once that’s up.)


Nearby are an official photo of Alongside Night author J. Neil Schulman and for no particular reason an unofficial photo from the Florida Democratic Party of Vanilla Ice and Gov. Rick Scott.

Our podcast was recorded this past Sunday, on Atlas cast member Rob Morrow’s birthday, as noted in the podcast (whereas today is Night and God cast member Kevin Sorbo’s birthday). As noted at the very end of the podcast, that was also the day of the big Climate Change March, not to mention the thirtieth anniversary of the better-known libertarian film Ghostbusters. We also include asides about Sin City, Xena, career advice for Dwayne “the Rock” Johnson, and Ed Krayewski’s dad’s graphic novel about jazz and communism in Eastern Europe, which is nearing its Kickstarter goal. 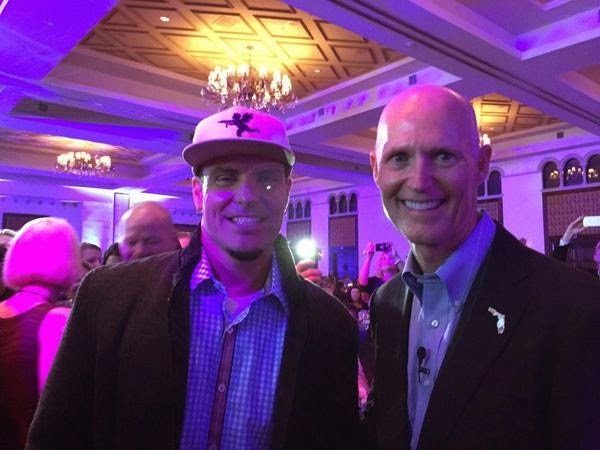 Herewith, though, some afterthoughts on some of the bit players in the works discussed in the podcast, all ones I’ve met, as it happens:

•There are Ron Paul cameos in both Atlas and Night.

I continue to hope, despite the naysaying of some of my radical brethren, that somewhat-more-moderate son Rand Paul will be the next president. Remember, the likely alternative is someone like John McCain who can barely give a straight answer about whether he once met with ISIS allies, though given the muddle that is American foreign policy, I almost don’t blame him.

Despite the fretting of the Washington Post over whether Rand Paul is shifty in his views and thus less reliable than his dad, I think he remains head and shoulders above (and more philosophically consistent than) any other likely candidate from either party. And my special Rosh Hashanah wish (Happy New Year!) is that neocons will not make the mistake of thinking he’s anti-Israel just because he’s less hawkish than most of the bomb-lobbing idiots in both parties.

In the real world, Deroy may also years ago have had the right idea on Citizens United, a Supreme Court decision that was briefly in the news again this month. If that decision, which protects campaign contributions as a form of speech, is ever overturned, suggested Deroy once, perhaps the ideal campaign finance rule would be: people who do not already hold office are free, private citizens and thus can take unlimited money from anyone they please -- but incumbents cannot take a dime.

That might help level the playing field a bit. And this reform, of course, will never happen. (You can probably discuss this with Deroy in person this coming Saturday 7pm at the Electoral Dysfunction onstage political panel at People’s Improv, 123 E. 24 in NYC -- and I’ll be on the panel myself one week later, on Oct. 4).

•I think conservative reporter Charles C. Johnson was an extra somewhere in Atlas, or at least was scheduled to be, though I didn’t spot him. He’s been in the news himself repeatedly lately, for helping to expose scandals surrounding Sen. Menendez, Sen. Cochran, Michael Brown, and others, pissing off Daily Caller, Wall Street Journal, John Podhoretz, and others in the process.

Critics will pounce on his occasional errors, but as long as he’s digging up dirt that others lazily overlook, we need him (and indeed I linked above to a McCain story on his GotNews site).

•And since Kevin Sorbo is in both Alongside Night and God’s Not Dead, I can’t help hoping someone out there is planning a double-feature screening.

As much as critics, especially liberal ones, may scoff at these films, they’re all far less frightening than one beloved by FDR and Eleanor -- and by (the) People’s Leah Rosen, too, apparently -- Gabriel Over the White House. Go on, read that Wikipedia entry about it if you dare -- and if you’re on the left, stop kidding yourself about what fascist monsters the Roosevelts were. (Oh yeah, Atlas Shrugged’s not so funny all of a sudden, is it?)
Posted by Todd Seavey at 11:50 AM

A copy of Alongside Night is on its way to Todd Seavey so he and his co-conspirators can review the movie in an upcoming podcast.