Lou Reed and Death (and Laurie Anderson and Neil Gaiman) 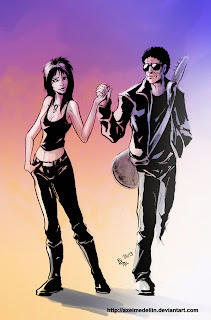 As I type this, musician Laurie Anderson and comics writer Neil Gaiman are scheduled to be in conversation onstage at the Rubin Museum here in NYC.  Coincidentally, someone decided to mark her husband Lou Reed’s recent passing by depicting him with Gaiman’s goth-girl version of Death (as noted by the site ComicBookResources).

If you fused Laurie Anderson with Miley Cyrus, by the way, the terrifying result would be approximately this (h/t Matt Pritchard).

If you (a bit perfunctorily) fused other alternative rockers with X-Men characters, though, you’d have this array, including Debbie Harry as Phoenix.

And speaking of fusing comics characters, if, as rumors suggest, DC Comics is contemplating doing something like killing Nightwing (Dick Grayson) and resurrecting him as a zombie-like Talon warrior of the Court of Owls, maybe they should give him the combo name Nite Owl, like the Watchmen character, just to give Alan Moore another rage seizure.

But on a more important note: I will update this entry when my second article on Reed’s passing -- for a publication in India this time -- is online.
Posted by Todd Seavey at 7:57 PM

Email ThisBlogThis!Share to TwitterShare to FacebookShare to Pinterest
Labels: Culture, Music, Sci-fi and such