Punk, the Island, and David Lynch vs. the Sex Pistols

David Lynch's film Eraserhead came out in Sept. 1977 -- one month before the Sex Pistols' song "Bodies."  But do we actually know if Lynch's later film Elephant Man was mimicking them with the line "I'm not an animal"?

1977 was quite a year -- it also gave us Star Wars, for instance.  It would make perfect sense, obviously, for Johnny Rotten and company to remind Lynch of the twisted outcast John Merrick -- but do we actually know?  I found no confirmation with a few seconds of Googling, but that's hardly scholarship, of course.  (In unrelated news: Tom Lehrer is alive.  Just makes me happy to think about that once in a while.)

This past weekend brought a few punk and punk-like moments (with dashes of post-July 4 weekend relaxation), so here are some photos -- of Tibbie X playing bass in the band Reagan Youth (at Grand Victory on July 6) with the drummer's kid assisting, a blurry shot of a bearded Williamsburg indie-folk band playing nearby on Bedford Ave. shortly afterwards, Agent Bleach from the old Jinx Society days looking baffled by a costumed lunatic performing some sort of art on the Bedford subway platform still later, a birthday celebration (complete with small dog and a shot of my anti-Communist leisure reading) for my friend Maria at Laurel Lakes Vineyard on Long Island the next day, and last but not least Rev. Jen showing off one wing of her Troll Museum.

All of that should combine to inspire me to put the final touches on a sci-fi short story about punk, Reagan, and time travel that I'm working on.  More soon. 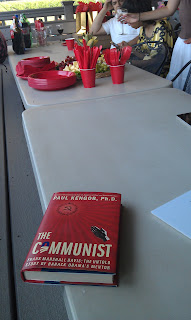