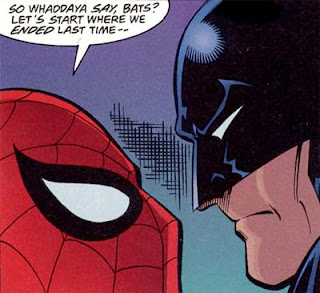 Politics and philosophy aside, there is one question on moviegoing America's mind this month, and we debate it at the next DIONYSIUM:

"Who would win a fight between Spider-Man and Batman?"

Plus: boating enthusiast and political activist ALLISON OLDAK will explain why Aquaman is best.

It all takes place Wednesday, JULY 25 (8pm) at MUCHMORE'S (2 Havemeyer St. on the corner of N. 9th, three blocks east of the Bedford Ave. subway stop on the L, first stop into Williamsburg from Manhattan).

And in the meantime, the always-helpful Ali Kokmen notes this subway spat between two guys who may or may not be the actual Spider-Man and Batman.  And MovieFone purports to show us how Batman would defeat the Avengers, one by one.  (But at the box office, Avengers has already beaten 2008's Dark Knight -- we'll have to see what happens when Dark Knight Rises opens this weakend.)

Email ThisBlogThis!Share to TwitterShare to FacebookShare to Pinterest
Labels: Culture, Dionsyium, Sci-fi and such