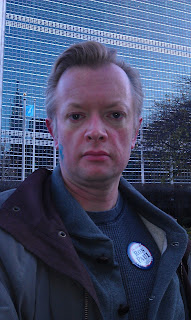 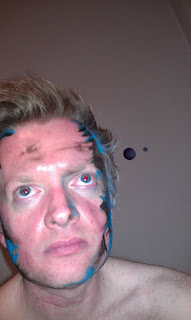 That’s me above in front of the U.N. HQ here in New York City, wearing my Ron Paul button – and the other picture is me in the free facepaint they were deploying the night before at a “Bowie Ball” downtown, so you’ll understand why some blue smudges may still be visible in the U.N. pic.  It wasn’t because I painted my face blue like in Braveheart before walking down there to shout “Freedom!”
The fading of the Gingrich boomlet means Ron Paul now leads in Iowa.  I hope he’ll win there, win the nomination, and go on to become president.  The fact that he’d do so while having much of the Republican establishment against him would only sweeten the deal – and would be a sad final contribution by that establishment before big government came to an end, with their obstructionism likely viewed by history as a last-minute abandonment of principle.
I can understand people freaking out and saying the old coot’s too weird, but then, all the other GOP candidates are also weird in various ways – and the guy in the White House regularly attended Rev. Wright’s church, you’ll recall.  People rightly condemn kookiness, but they tend to condemn only the kinds to which they are unaccustomed.
If a political candidate comes from a background of socialistic community organizing and Ivy League postcolonial thinking, or from Texas prayer meetings, it doesn’t surprise us enough to cause alarm.  If instead he comes, in essence, from the 1970s survivalist movement, people want to summon psychiatrists, though it’s not clear that the kinds of claims survivalists made were less true than those made by those other subcultures.
The question should be who will produce the best results in office, and by any remotely sane limited-government-oriented standard, you have to at least strongly suspect it’s Ron Paul.  He might do well to treat his weird past philosophical (and rhetorical) baggage almost as a “gradual conversion” story.  If Wright didn’t bring down Obama – amazing, when you think about it – I don’t know that Paul need be brought down by past dabbling in conspiracy theories.
In fact, given how badly mainstream conservatives have screwed up over the past few decades, maybe it’s time to let people like the Randians and Birchers back in, precisely the two factions Buckley thought most in need of exiling from the right.  How much worse could they do than, say, Bush?
(And recall my theory stated years ago that it took a combo of craziness to make the first American Revolution possible: religiosity, populism, individual liberty, anti-monarchical conspiracy theories, etc.  If the Straussians are allowed to steer churchgoers in order to augment their power, perhaps libertarians can steer conspiracy theorists for contrary ends.  Heck, I’d vote for a UFO obsessive if I were confident he’d cut spending – and indeed I’ve just been told that Goldwater intended to release UFO files if elected.)
But as a reminder that conspiracy theories are, generally speaking, a bad thing – and as my little nod to Hanukkah – here’s a link to the final graphic novel from the legendary Will Eisner, The Plot, tracing the sad history of one the nastiest conspiracy-theory hoaxes of all time, the Protocols of the Elders of Zion.
I expect that Paul is focused on the very real conspiracy – or organized criminal gang, if you will – called government, not on imaginary conspiracies like the Elders.  And so, here’s hoping Gingrich and Romney destroy each other and vault Paul to the presidency by default (and that the hackers called Anonymous don’t end up invalidating the Iowa caucuses with their reportedly-planned mischief and having the ironic effect of keeping more-authoritarian candidates in power).
That’s all I want for Christmas – after which, if Paul sets the tone for his party, I can look forward to the day when all conservatives care more about stopping creeping socialism than about (A) honoring Malcolm Muggeridge or (B) how many troops to keep in Kurdistan, not that those are unimportant topics.  In fact, it might be best for American freedom if some cadres of professional Christians/Mormons and Jews are too distracted by the holidays to pen more denunciations of Paul in conservative publications before January 3 arrives.
I know I feel as if it’s coming up too fast for me to properly prepare.  This could be the turning point in the story of human liberty I’ve been waiting for and not really expecting to see in my lifetime.  I feel like one of those characters in a Left Behind novel – or a survivalist manual, if you will – who suddenly realizes he’s done nothing to prepare for the End Times.  Except this may be a happy new beginning.  America could use one.
•••
I don’t think 2012 will be the end of the world, but (as I noted on Twitter, where my Sunday tweets, by the way, described the Occupy event I was attending) it will be the thirtieth anniversary of Peter Kreeft’s book Between Heaven and Hell: A Dialog Somewhere Beyond Death with John F. Kennedy, C. S. Lewis, and Aldous Huxley, which was inspired by
the fact that those three men, with different ideas about the afterlife, all died on the same day in 1963.  Perhaps Kreeft (now seventy-four) should write a new edition featuring a dialogue between Christopher Hitchens, Kim Jong-Il, and Vaclav Havel, who died within three days of each other (Hitchens wrote about both the others, too, and visited North Korea – he also famously referred to a watchful and moralistic God as the equivalent of a “celestial North Korea”).

Shortly before Hitchens collapsed and canceled his book tour a year and a half ago, I spoke to him briefly at the tour’s final book-signing, and he told me he’d be interviewed along with his Christian conservative brother Peter Hitchens by Fox News’s religion correspondent Lauren Green.  It was not to be.  (Minnesota-raised Lauren also played the news anchor in one version of the video for “My Name Is Prince,” by the way.  And she's a classically trained pianist, knew Prince in high school, was Miss Minnesota, and is very nice.  Aside from being six feet tall, she’d make a nice match for Prince.)
I doubt the result would have been a retreat or conversion on the part of either Hitchens, though Mark Judge hoped shortly before the end that Hitchens might switch from my team to his, as it were.
(Meanwhile, a guy I know has been toying with a Straussian embrace of quasi-religiosity, that woman I mentioned in a recent entry who believes in synchronicity also thinks she may have had prophetic dreams, and Nick Carr had a disturbing encounter with Santeria and a salamander in a cemetery.)
•••
If I’m more interested in the practical results of political figures’ weird philosophies than their philosophizing itself, it makes sense for me to ponder the old question of whether religion makes people more moral.  I used to be more willing to give the religious folk the benefit of the doubt on that one (without thinking the difference is that significant – the stats are ambiguous).  I swear I didn’t start out, in my atheist youth, assuming religious people were nasty.  I had no Bible-thumping mean uncle to flee from or anything like that.  But adult experience has made me more wary of the intensely religious – and even of mild-mannered converts (as opposed to those who just passively and quietly remain with the religion of their birth, not wanting to rock the boat).
There seems to be a long list of religious converts with whom I’ve had contact or from whom I am a couple degrees removed who are either known to be difficult personalities now or were in some way poorly-behaved in the past (unsurprising, I suppose, since they often converted precisely to flee their pasts).  My December Book Selections entry included The Politically Incorrect Guide to English and American Literature, which noted the tendency for century-ago Decadents to end up converting to Catholicism.  Thrice-married egomaniac Newt Gingrich did as well.  My ex Dawn Eden wrote a book about going from rock groupie to Christian (I’m the pseudonymous focus of Chapter 18) and is now specifically a Catholic who has taken a vow of chastity (her book out next year is about how childhood abuse sometimes inspires adult religiosity and conversions) [CORRECTION: Dawn e-mails from DC to note that the chaste-until-marriage plan is just the way all dating Catholics like her are supposed to live, not a special “vow” – and she says the book’s emphasis will be on the saints, some of them childhood abuse victims, as models for adult psychological healing].
Rather than look away from all those sorts of messy psychological issues in favor of the tidier epistemological ones (fit for philosophy class) that religion raises, perhaps these are precisely the kinds of questions I should throw into the hopper for next year’s bar debates in Williamsburg – which may get a slight format tweak and name change, so bear with me while we figure out the last few details (more soon).
•••
Some in the GOP establishment are encouraging people to disregard the January 3 results if Paul wins.  I wonder if this will produce cries of attempted disenfranchisement from the sorts of people who normally worry about that kind of thing – such as the people in New York who claim to think it’s vital that (A) prisoners vote (despite arguably not being the most responsible portion of the citizenry) and (B) that they vote in their home districts instead of boosting the rolls in the more frequently rural and conservative places where they’re imprisoned.  Democracy, maybe – Democrat vote-increasing strategy, absolutely.
I’d love to meet one of these idealists someday and see if he’s prone to say things like, “Those guys may be murderers – but they’re solid Democrats!”
Then again, in a world where many things (such as drugs) are illegal that should not be, I am not automatically unsympathetic to criminals.  Take these Indonesian punks resisting anti-mohawk laws, for instance.  Good luck to them and to insurgents everywhere.
Posted by Todd Seavey at 12:20 PM