1. To help kick off the fundraising for the libertarian (and often science-fictional) website LibertyIslandMag, you can donate here. (LibertyIsland is certainly more deserving of your money than Brian Lehrer and the cowardly shits who run NPR, judging by Adam Carolla’s recent experience with them.)

2. For a libertarian take on the real future, Stossel this Thursday night (June 19 at 9 Eastern) is scheduled to devote a whole hour to topics like Ray Kurzweil, transhumanism, and whether all of us being killed by robot soldiers is likely.

3. But a nastier vision of growth is that of quasi-libertarian Tyler Cowen (the apostate libertarians are almost always creepier than the rigid adherents of the core philosophy, mark my words), who wrote in the New York Times this weekend (in defiance of all conventional libertarian wisdom) that he thinks wars bring prosperity.

Well, we’re still on track for WWIII in Ukraine, and a surprising number of people across the political spectrum seem to think a second decade of war in Iraq might be preferable to the current crisis there, so: prospects are lookin' good, Tyler! Except for the massive expenses of death, destruction, emboldening of the state, and inevitable war debt, I mean.

(Cowen famously wrote elsewhere that he thinks the future will be dominated by autistic or near-autistic people, and he may be living proof that we must hope the autists side with empaths instead of with the sociopaths. How the announcement of the publication next year of a lost Ayn Rand novel -- h/t J. Arthur Bloom -- will affect that process I do not know.)

4. Meanwhile, far more subtly, Christians are fighting over econ, with religion, as usual, failing to win all its adherents decisively either to markets or welfare-statism. But if that leads to the New Yorker perceiving Cantor-ousting Republican congressional candidate David Brat as a sort of Christian liberal-tarian foe of crony corporatism -- and thus sympathetically likening him to Elizabeth Warren -- is that such a bad portent?

Like Rand Paul, Brat may hope to be all things to all people while still ending up being far more libertarian than the usual mushy “moderates” who seek that sort of crossover appeal.

5. At least religion promulgates a vision of a future without war: the lion lying with lamb, and at least in the real world we can watch video of a mouse lying with a kitten. 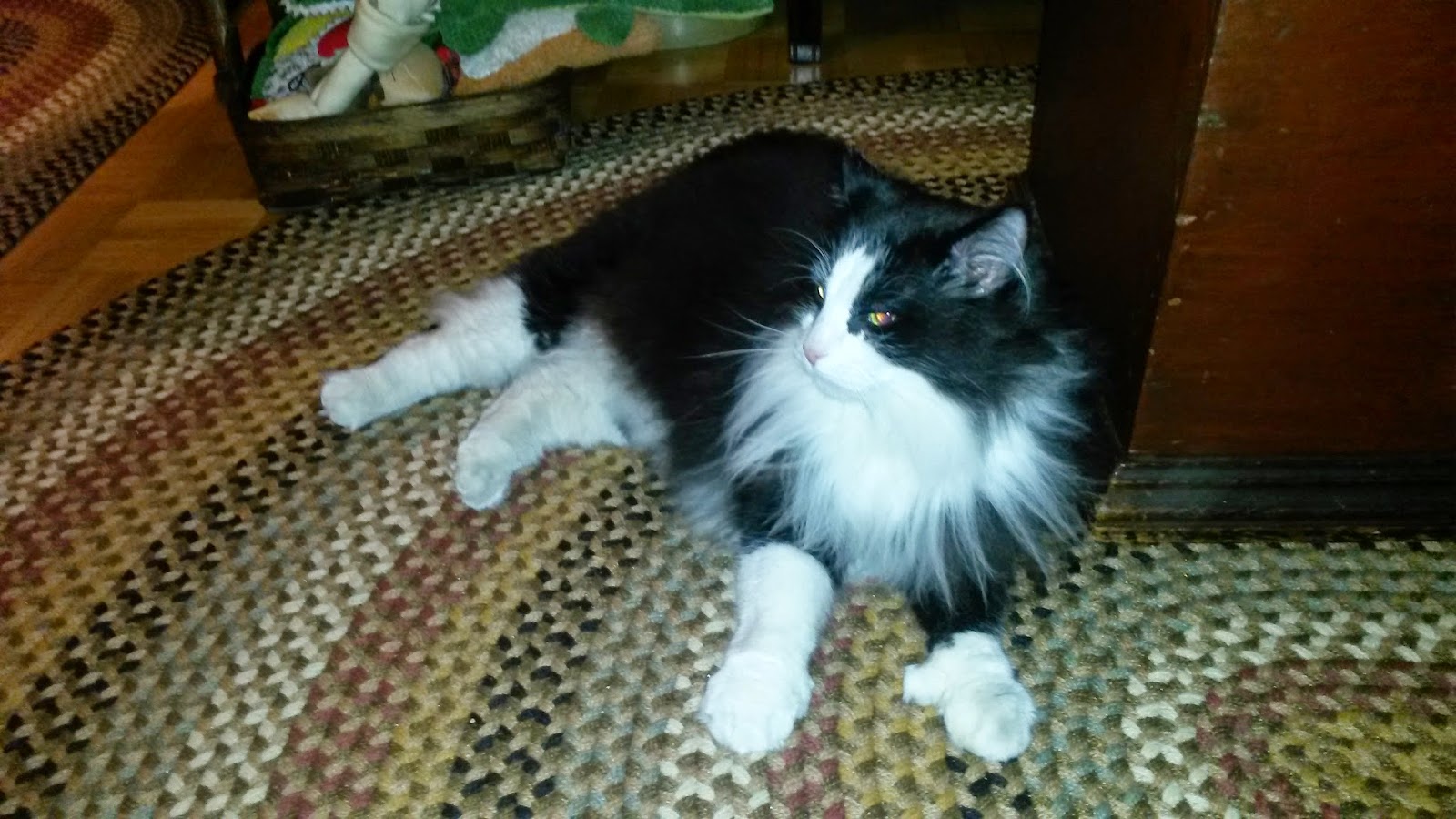 6. My parents’ future will include new cat Bobcat Bob, who doesn’t seem too militaristic toward the other pets (photo h/t Marilyn Tallman).

7. I did not realize that after about two decades of inactivity, the quintessentially New Wave band Blancmange had a couple comeback albums in recent years and, even more so than Duran Duran or Blondie, they stylistically changed nothing -- nothing! Here, then, is an example of what they sounded like a mere three years ago, which is to say: very 80s retro-futurist.

8. For more hurting of your head with time: back when Toni Basil (of “Mickey” fame in 1982) was twenty-three -- in 1966(!) -- she sang about the
sorrow of what it’d be like when “I’m Twenty-Eight” and over the hill. Here that song is accompanied by shots including her in conversation (from 1969’s Easy Rider) with archetypal hippie actor Peter Fonda.

By 1982, instead of being over the hill, she had a one-hour BBC special, meaning if you watched TV at all that night, there’s a good chance you saw this number.

I also think a young Roxy Epoxy of twenty-first-century band the Epoxies must have seen and been influenced by the “Mickey” video back when she was a kid.

All of this is possible due to hypothetical particles scientists call tachyons, which travel backwards through time.

9. Game of Thrones season 4 (and thus book 3) is now in the past (no spoilers!), but that huge Dothraki king actor guy, Jason Momoa, has a future playing Aquaman, reportedly. 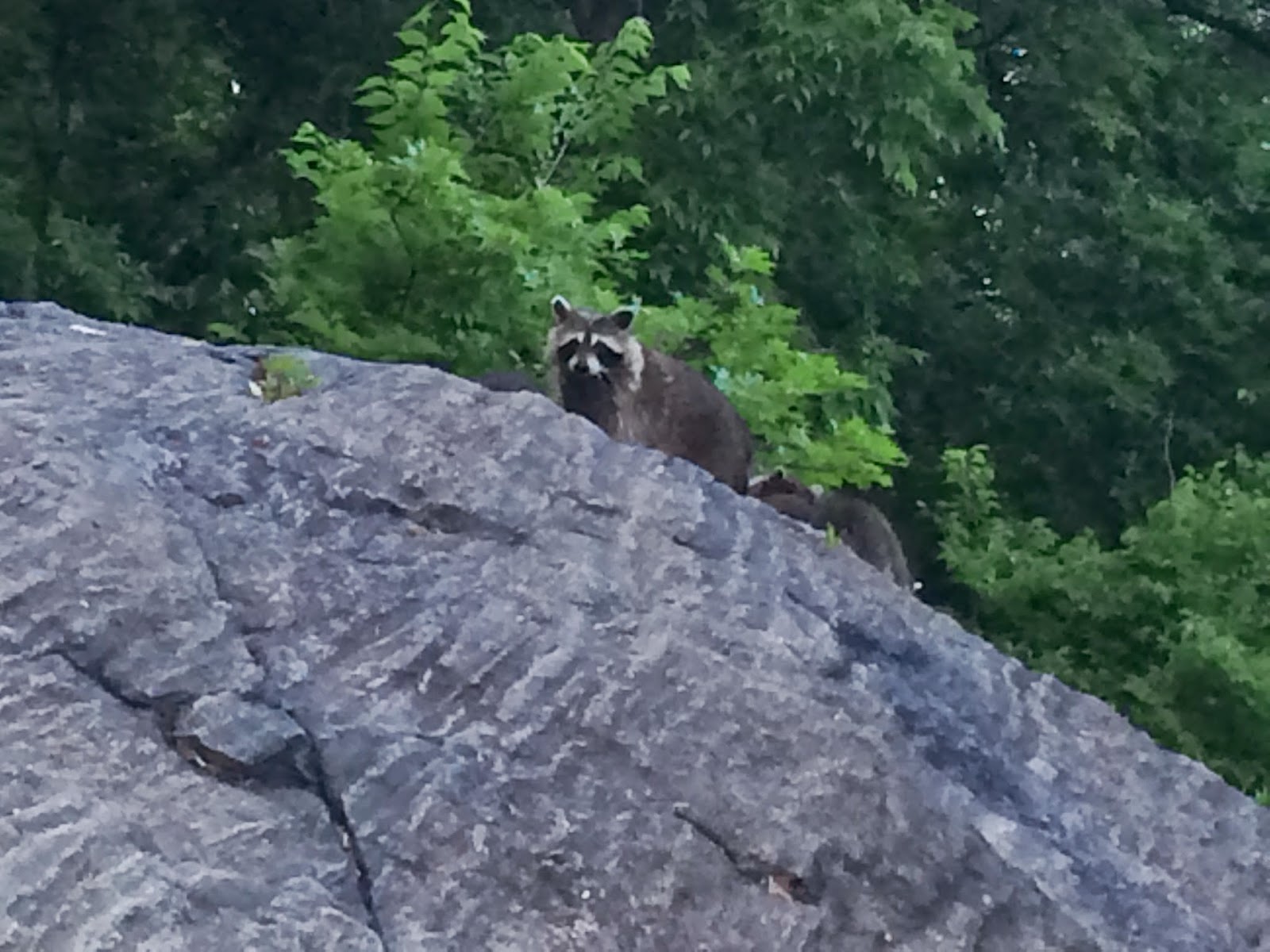 The under-respected hero will at least make cameos, apparently, in the lineup of seven DC Comics films that gossip blogger Nikki Finke predicts for 2016-2018, including Batman v Superman, Shazam, and Sandman the first year; Justice League, Wonder Woman, and a Flash/Green Lantern team-up the second; and another solo Superman movie in 2018, if all goes as planned. If they stick to three a year, that brings them up to Marvel output speed even with the Disney, Fox, and Sony Marvel films counted -- as long as the public doesn’t tire of superheroes in 2015, of course.

10. But whatever the future may bring, Central Park still offers the old-fashioned pleasure of watching raccoons emerge from under the Boathouse each night at sunset and make their way up and over the big adjacent rock, as they did once more this past Sunday.
Posted by Todd Seavey at 12:02 PM

As I read Tyler Cowen, he's careful not to say that wars themselves bring prosperity. Instead, he's suggesting that anticipation of war in the future causes governments to make better economic policy decisions:

"This view does not claim that fighting wars improves economies, as of course the actual conflict brings death and destruction. . . . Rather, the very possibility of war focuses the attention of governments on getting some basic decisions right — whether investing in science or simply liberalizing the economy."

I find this claim a little difficult to believe. What have the last 13 years been for the United States if not one anticipated war after another, concurrent with a steady deliberalization of economic policy?