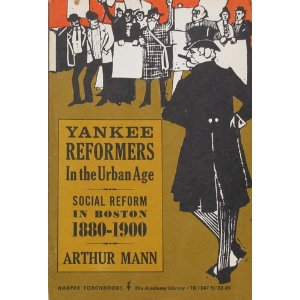 This entry is about Victorian-era Bostonians wrestling with issues of radicalism and reform – but if you want to watch your contemporaries do it, remember that you can:

(A) watch me moderate a free Peter Schiff vs. Richard Carnell debate on the financial crisis today at 4pm at Fordham Law School’s moot court at 140 W. 62nd

(B) join me (if I get in) in the audience of a free Chris Hedges vs. CrimethInc debate about Occupy tactics today at 7pm on the lower level of the CUNY Grad Center at 34th and 5th

(C) watch me moderate an Occupy/Tea “summit” at Muchmore’s at 2 Havemeyer St. in Williamsburg as our Monday (Sept. 17) 8pm Dionysium (by all means spread the word and join us, members of both movements).

I mentioned the publication of Utopia in a prior entry.  Utopia is also mentioned in one of the two epigram quotes at the start of Arthur Mann’s 1953 book Yankee Reformers in the Urban Age: Social Reform in Boston 1880-1900.  The quote, about unapologetically seeking “the road to Utopia,” comes from an 1890s volume on socialism – though it’s juxtaposed with a passage from the libertarian but far less rosy-eyed analyst William Graham Sumner.

Yankee Reformers is a great overview of the tensions within the booming community of Boston intellectuals just prior to the Progressives’ takeover of politics – nearly all socialists of some sort, nearly all religious, mostly upper-crust, and struggling to figure out how to reconcile those tensions and how far to go if they were disinclined to embrace Marxism or Nationalism outright.

I couldn’t help thinking as I read it, “Ah, this is the origin story of the sort of elite modern-liberalism you found throughout the Ivy League in the twentieth century.”  We so often look to England for the story of (essentially libertarian) classical liberalism transmuting about a century ago into (essentially social-democratic) modern liberalism, but for that distinctive Northeastern-U.S. blend of well-meaning missionary zeal, high-minded slight contempt for the lower orders even while longing to work with them for their betterment, willingness to reorganize society to get rid of commerce, and confidence that respectability can be maintained throughout, look to Victorian Boston.

2012 is not a year full of utopian optimism, but it is a year when the candidates of both major parties are Harvardians – as is the Green Party candidate, while the Libertarian Party candidate, for whom I'm voting, Gary Johnson, has a current Harvard professor as his economic advisor.  That means we can probably expect at least a dash of utopianism's blander, less ambitious New England cousin, reform – even if a recent mass-cheating scandal (in a government class, no less) raises questions about Harvardians' right to reform the rest of us.

(Unlike some conspiracy theorists and moviegoers, I don’t worry that Obama mentally-metaphorically comes from Kenya; I recognize he comes from the Northeast.  I will not deny that the Northeastern blend of attitudes likely influences my own stoic, moralistic thinking, since I grew up in New England myself.)

Mann, a University of Chicago man, broadly describes the reformer impulse long present in Boston as being rooted in dissatisfaction with the world as it is and the moral conviction needed to try making it more nearly as it should be.  That impulse could be driven by (among other things) secular-liberal or religious-puritanical beliefs, and in Boston it has historically been driven by both.

Near the start of Mann’s account, we meet Brooks and Henry Adams, wanting to make the world a better place but by the end so pessimistic about the prospects for improving humanity that Henry Adams wrote a novel about a would-be reformer longing to ditch democracy and live in an Egyptian pyramid.  Adams began to look admiringly upon medieval France.

But other social reformers were more optimistic – buoyed by Kodos-like slogans as “Look up and not down; look forward and not back; look out and not in; lend a hand.”  And they were not prone to Adams’ lack of faith in the American tradition –
precisely because they thought America was naturally reformist and socialist.  Edward Everett Hale denounced laissez-faire capitalism as “un-American” and said the “friends of strong government” were “acting on the lines of our best traditions.”  Social worker Frank Sanborn warned of the “Franco-Britannic specter of laissez-faire.”  American tradition, Christianity, charity, and socialism would all blend comfortably, in the thinking of the Reformers.  There was little talk of and little sensed need for anything like violent revolution or dictatorship.

This now-jarring sentence of Mann’s, writing about it all many decades later, is itself a reminder that we see the tensions in the Boston milieu differently than generations past did: “Boston to them was the Mecca of the Tea Party and the Liberator, of Brook Farm and the Over-Soul.”

One ingredient in the reformist mix that we have largely forgotten – even though it still exists – is the religious left.  From the Unitarians urging pastors to read Marx to the German-immigrant socialist who founded Reform Judaism, Boston was proof that religion is at best an unreliable ally of capitalism.  Many there admired William Jennings Bryan, the populist Democrat, who was of course no atheist or agnostic.

(Catholicism still seems to have its own internal sense of how the political spectrum works even today, and still sometimes frustrates those of us rooting for consistent laissez-faire.  You can join me in seeing Catholic writer Dawn Eden speak at the offices of the religious magazine First Things at 6pm tomorrow, Thursday the 13th, at 35 East 21st St., and though she and the magazine are both thought of as conservative, she’d readily – and very politely – admit that earthly matters like economics and electoral politics have never been her highest priorities.

Yet you can perceive the general yearning to do good in the world that could manifest itself both in ways I’d judge to be very positive and, if combined with prevailing socialistic econ assumptions like those in the air among Victorian Boston intellectuals, sometimes bad.  The Catholics on the religious right today – not Dawn herself but the more conventionally-political ones – sometimes talk as if Catholics are reliably conservative in the secular-political sense of the term, but the roughly one-half of Catholics who vote Democrat are not just an aberration.  I cannot put much faith in faith when it comes to politics, much as I might like some of the faithful.)

Populism, despite its useful ties to religion, was not the main route of attack for the Boston Reformers, though.  Many of the reformers were esteemed leaders in their communities and well-positioned professors, and they did not merely incorporate political messages into their teachings but rather helped create entire disciplines such as sociology with the aim of revealing the objective science behind social reform.  Just as the London School of Economics was consciously founded with the aim of promoting socialism, the Reformer professors were interested in inculcating oughts rather than just discovering what is.  They consciously combated the then-prevailing orthodoxy in U.S. economics departments built on the likes of Bastiat, Mill, and Spencer.  That the universities are left-liberal over a century later is a testament to the Reformers’ lasting success – though they have not fully conquered the econ departments.

Reformers, writes Mann, “endowed the Boston seminarian and collegian with the idea that he stood between the plutocrat and the proletarian, that he was neither grasping nor degraded, but altruistic and refined, and with social-science know-how.”  Here, too, was born much of the “social justice” rhetoric that helped inspire so many twentieth-century foes of free markets and today has even begun creeping into libertarian discourse (the “liberaltarians,” etc.), perhaps dooming today’s laissez-faire doctrines to an erosion/mutation from within much like that that destroyed nineteenth-century liberalism.

At the same time, notes Mann, no Boston professors were so radical as to be fired for their views, which cannot be said for professors at Brown and other institutions at the time.  More amazingly, arch-laissez-faire-advocate Herbert Spencer (due to his emphasis on progress) was as popular with some of the Reformers as were the thinkers who attacked him, his ideas mingling with anti-capitalist ones in that confusing but sometimes endearing way that seemingly-opposed strains of anarchism went for decades in the nineteenth century being perceived as allies due to some shared concerns and a shared tone of optimism.

Boston trade unions, as opposed to socialist clubs, were strong advocates of Spencer for a time and rightly saw the state as a dangerous granter of monopoly privileges to big, establishment businesses.  Would that today’s unions were as wise.  William Graham Sumner – anthropologist, founder of sociology, anti-imperialist, laissez-faire advocate, Darwinist, proto-libertarian – and his notion of the “Forgotten Man” were invoked by the trade unions to remind the political establishment its anti-market policies harmed the workers.

In fact, Reformer Frank Foster – somewhat out of step with the Reformers around him – was so pro-laissez-faire that he criticized Hamilton and other Federalists for increasing the size of the central government (in a tone that would be very familiar to radical libertarians today) and countered quotes from Marx with quotes from Spencer (though Foster, too, embraced some regulations).

But to end on a higher note, let me add that Mann ends up making a rather positive assessment of the efforts of the Reformers, writing: “Limited and fallible – like all men – the liberals of the 1880s and 1890s saw well the evils of their own age.”
Posted by Todd Seavey at 1:15 PM