BOOK NOTE: “Stealing You Blind” by Iain Murray (and other doses of reality) 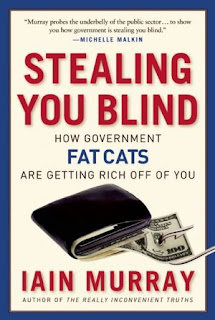 If there’s one lesson to be drawn from the past few decades of political history, it’s that anti-government forces have been far too polite, all too willing to engage the enemy on its own terms by talking about what government ought to do under ideal, philosophy-guided circumstances, as if that were relevant.

On every side and across the political spectrum, humans are beset by delusional intellectuals singing some variation on the siren song of acquiescence to government – from the authoritarians, Muslims, and Catholics cooing like Loki that submission to authority is humanity’s “natural” state, to the neoconservatives thinking that arguments about government ineptitude and misbehavior do not apply to the military, to the “liberal-tarians” condescendingly urging more consistent libertarians to accept just this one wafer-thin bit of the welfare state and welfare-statist rhetoric so that they (not necessarily us) will be allowed to eat in faculty lounges, that being Step 1 to human liberation, or at least a nice benefit for the liberal-tarians.

There will always be plausible-sounding philosophical arguments for government (especially in academia, which generates plausible-sounding arguments for everything), but a horrifying look at what government really does – what it inevitably really is – will always reveal these arguments, these siren songs (ordered liberty...efficient provision of basic services...social-democratic engagement...), as complete horseshit.

Government is crime, and talking about its reform is as deceptive as talking about how to make the Mafia behave nicely.  Start from that premise and you will, at long last, have begun to think about politics, possibly for the first time in your life.

Luckily, there are books that skip most of the philosophical arguments (though we do need libertarian ones) and just survey various agencies of government, cataloguing the disastrous misallocations of resources, self-serving acts of politicians and regulators, and heartbreak-inducingly routine squelching of human hope via bureaucracy that are the real day-in and day-out of government activity, even when it isn’t engaged in outright mass murder, which of course it often is (100 million dead from socialism alone last century, and socialists still think they hold the moral high ground).

Two such books that influenced my thinking were P.J. O’Rourke’s Parliament of Whores and Philip Howard’s The Death of Common Sense.  My ex-boss John Stossel just released a book about government aptly titled No, They Can’t.  Very much in that vein is Competitive Enterprise Institute vice president Iain Murray’s Stealing You Blind: How Government Fat Cats Are Getting Rich Off of You.  Read it (read all of these books), then spare me your next metaphysically-intuited pro-government argument.  End the nonsense.  End the lies.  End government.

Whether paying for politicians’ expensive office furniture even in times of purported fiscal crisis, arresting people for clearing debris after storms without proper permits, or subsidizing failed industries while imposing surtaxes on innovative ones, government will always tend to do the wrong thing, for the simple reason that it isn’t the government’s money, isn’t the government’s lost decision-making power, isn’t the government’s life.  If you encourage it to continue its activities, you aren’t helping and are no friend of humanity.

In one amusing passage, Murray notes that in World War II,
the OSS, precursor to the CIA, issued a document called Simple Sabotage Field Manual, and its advice for those able to infiltrate enemy production bureaucracies in order to slow them down included: “Insist on everything being done through ‘channels.’  Never permit short-cuts to be taken in order to expedite decisions...When possible, refer all matters to committees...Attempt to make the committee as large as possible...Be worried about the propriety of any decision...”  He jokingly concludes that U.S. government seems to have been infiltrated by enemy agents long ago.

And the intellectuals want all our life permeated by government-style decision-making.  It’s like a warm family reunion in their imaginations.

Meanwhile, people are dying in the streets – quite literally in some cases.  Murray recounts the 2010 snow storm right here in New York City that led to unionized city snowplows protesting what they saw as insufficient deference to unions by plowing more slowly.  Leftist journalists dismissed politicians’ comments about the work slowdown as baseless, but as one man whose three-year-old died en route to the hospital told the New York Post, “Clean the streets, because that’s why the ambulance came too late.”

Labor unions and the preservation of government bureaucracy are of course vastly nobler causes than preventing death.  So go ahead, keep being a leftist.  Burn with the righteous conviction that you are on the side of good, you despicable, murderous ignoramus.  Or change.  It’s never too late.

The most recent two issues of the libertarian-friendly political science journal Critical Review also featured articles that took a welcome look at reality rather than just theory, including pieces on (A) public choice theory (the idea that government is, gasp, susceptible to self-interested and biased behavior just like other people and institutions but without the legal and economic checks that the rest of us face on our laziness and parasitism), (B) the “webs of faith” that sometimes cause political foes to talk past each other, (C) the perverse and largely irrational appeal of “social democracy,” and (D) the surprising and harrowing conflicted feelings (not to mention literal nightmares and panic attacks) of even avowedly pro-choice abortion clinic staffers when confronted with fetal limbs and spasming quasi-infants.

(This last piece echoes my own characteristically sane and moderate view that people intuitively, gradually sympathize with late-gestation fetuses far more than with very early-gestation fetuses but that the usual philosophical arguments, once again, have trapped us with unrealistic, idealized either/or positions whereby either full-fledged people occur at the moment of conception or else at the moment of birth/viability, with all the months of ambiguity in between somehow swept under the rug – because almost no one likes ambiguity, whether they conceal it by angrily philosophizing or by angrily refusing to philosophize.)

Somewhere between philosophy and direct engagement with practical political reality was the Ron Paul campaign to dismantle big government, and though I think it’s time to switch gears and boost the campaign of Libertarian Party presidential candidate Gary Johnson (unless Romney picks a very surprising v.p. running mate), I hope nonetheless to post video this week (still being tinkered with by our videographer) of last week’s Dionysium discussion about Ron Paul’s Revolution with author Brian Doherty.

Like many of the Paulites, I don’t ask that you love the man.  I ask that you do something simpler and saner, which is hate the government.
Posted by Todd Seavey at 1:52 PM