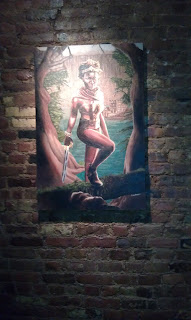 I always liked strong, outspoken women.  Of course, I naively, perhaps sexistly, assumed in my formative years that they’d never be a danger to me, just admirable in a harmless, cute way – y’know, like tigers in a nature documentary or something.  Or that we’d all be strong together in a healthy, cooperative way, like Superman working with Wonder Woman, if you will (as opposed to Superman being pummeled by Ursa or, weirder, battling the new villainess called Masochist).
“Power relationships” – even metaphorically speaking – are for people who don’t intuitively grasp mutually-beneficial exchange, which is the basis of all civilized life.  But strength is, in its own right, a good thing.  And so, a list of tough-dame news items on this day of mutual admiration (followed by thoughts on war):
•Lolita Bar – where I may be hosting another event in just a few weeks – often has art on its walls and recently amused me with the painting above of a black woman with a sword rising from a lake, perhaps the most sci-fi/fantasy-ish thing I’ve seen on their walls (not that black women in the real world never rise from lakes carrying swords – I’m all for it).
•April brings a major motion picture about President Sarah Palin battling long-lost Nazi colonists from the Moon, I kid you not: Iron Sky.  Someone tell William Kristol (whose daughter’s about to be married, I learned last night at a performance by Hannah Meyers, the thinking man’s Victoria Jackson).
•I was pleased to see the new Soderbergh action movie, Haywire, at least uses a Mixed Martial Arts chick who looks like she could actually kick the necessary asses to advance the plot instead of being an implausibly wee pixie (much as I enjoyed dainty Kate Beckinsale defeating cops in Underworld Awakening – but she’s a vampire-hybrid, so she’s allowed to look like that).
•An interesting result of DC Comics revamping/relaunching its characters a few months ago is that Wonder Woman is one of their best-selling titles – mainly because they went “dark” in a Greek-myth-based but almost “Grimm’s fairy tales with all the gruesome parts intact” sort of way.  This is the first time in a couple decades she’s been a best-seller, despite DC constantly trying to raise the profiles of female and ethno-marginal characters.
But they can never cancel her because (unlike most of their characters) they are contractually obligated to return her to the estate of her creator if they cease publication, no matter how low her sales numbers.  Anyway, they should be happy about this not-wholly-anticipated victory.  (Here are several minutes of Lynda Carter spinning from the 1970s by way of celebration.  H/t Christine Ames.)
•Wonder Woman has not fared as well on the screen lately, with her recent TV-pilot a flop and her movie by Joss Whedon collapsing in the script stage – but WW’s loss is our gain, since that freed up Whedon to direct and write this ensemble (assemble?) item more appropriate to his talents (and Scarlett Johansson can also kick implausible amounts of ass while looking like a pixie without me complaining).
•Veronique de Rugy battles the state using statistics and can hold her own, but it was nice to see someone spring to her defense when she was unfairly assailed by lame Jonathan Chait.
•I grow weary of gradualist, asymptotic approaches to individual liberty and property rights (the gradualists always seem to start out humble and cautious but at some point forget the truly humble principle “First, do no harm”).  Thus, I am saddened that
the delightfully radical show FreedomWatch (for which I used to work) ended last night.

Better a world full of people like Judge Napolitano than a world full of people like David Frum, who is so proud of his moderation it is almost as if he aspires to be David Brooks – and that is as lame as being a musician who grows up dreaming of being Katy Perry instead of being Pat Benatar (to, uh, return smoothly to our theme).
•I enjoyed hearing Ann Lee discuss her book about What the U.S. Can Learn from China last night, though it also meant hearing some gasping and hissing in the back of the room when I suggested we could learn more from Hong Kong and rebellious outlying regions than from Beijing – and hearing a former federal employee sitting next to me (an elderly woman from Harlem) urge Ann to praise China’s one-child mandate.  Ann declined.
•I will not be able to make it to Tim Snyder’s talk tomorrow (5:15pm) at Sarah Lawrence College about his acclaimed book Bloodlands (on the parallel mass-murders by Stalin and Hitler in Central and Eastern Europe), which means I won’t get to see the notorious and oft-stolen sign above the lawn at one all-girls Sarah Lawrence dorm that notoriously reads “Titsworth: Fully Sprinkled.”
I will make up for it by seeing the war-torn-Balkans film version of Shakespeare’s Coriolanus (and I strongly urge you to see the telekinesis drama Chronicle, too).
•“Coriolanus” somehow reminds me of Rick Santorum – and the whole annoying process of the GOP floundering around in search of a Not-Romney without yet choosing Ron Paul.  To which I say:
Remember, neocons: the public supports wartime presidents.  Encouraging wars with Iran and Syria is the best way to get Obama reelected.  Act accordingly.
I can sympathize with people who say they want a small government and a small military-security complex.
I can also sympathize, though, with people who say they want a small government except for a big military-security complex.
But people who say they actually want a big military-security complex more than they want a small government – and in this category William Kristol and David Brooks place themselves explicitly – are useless fascists and should be driven from the Republican Party.  Happy Valentine’s Day.
Posted by Todd Seavey at 10:52 AM

"“Power relationships” – even metaphorically speaking – are for people who don’t intuitively grasp mutually-beneficial exchange, which is the basis of all civilized life."

Exchange and the division of labor do not mandate coplementarity in all things at all times. Does your perpetual attempt to build up an alliance of people who support libertarian principles demonstrate that you don't grasp mutually beneficial exchange?

Well, it sounds like your objection to the "power relationship" is that it doesn't involve complementarity and hence doesn't allow for gains to trade between the partners. Did I misunderstand that?

If not: sometimes, against a large background society of lots of specialization and lots of gains to trade, there are good reasons for two or more people to specialize together and shift the gains-to-trade thinking to outside their walls: the power couple, the team of like-minded political allies, the firm.

I _think_ you're using "power relationship" to mean almost the opposite of what I am. We may need to resort to concretes to avoid abstract confusion. I _think_ you're worried about me (or others) objecting to pairs of very similar mates. I'm objecting to people thinking all of life is about predator/prey or winner/loser or master/servant relationships. I'm just saying (no matter how many people we're talking about) that I think it's far more illuminating for people to think of life as cooperative than (like, say, Foucault) to think of it as all about who's dominating whom. I assume we basically agree on this.

Ah! OK, yes, I was confused. I was reading "power relationships" as a concept like "power couple."