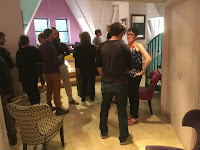 •THE FUTURE: I will also one day soon enough host real-world events of my own again. In the meantime look for my weekly columns on Splice Today. Eventually, I will reemerge with that ten-part, 10,000-word blog essay I promised to put on ToddSeavey.com and more. (And of course: please read my book.)
Posted by Todd Seavey at 5:32 PM


Viz Apparel is a innovator in the tradition custom apparel manufacturing, contribution all dimensions of clothing manufacturers a one-stop workshop for their customized supplies. Viz is conscious of how stimulating it can be to find trustworthy apparel manufacturers, so we deliver you with a complete answer. We offer a wide variety of customization choices composed by the greatest modest valuing on the marketplace.

The metal cutting phase is expected to be the leading phase on this market through the forecast interval. Based on application, the market is classed into automotive, basic machinery, precision engineering, transport machinery, and others. Quality in a machining center must be inbuilt from the design via delivery and set-up. Finally, when the processing is finished, the precision gap and the precision of the Heated Lap Blankets ending groove should be measured in time to ensure the meeting of the mold after the workpiece is unloaded.