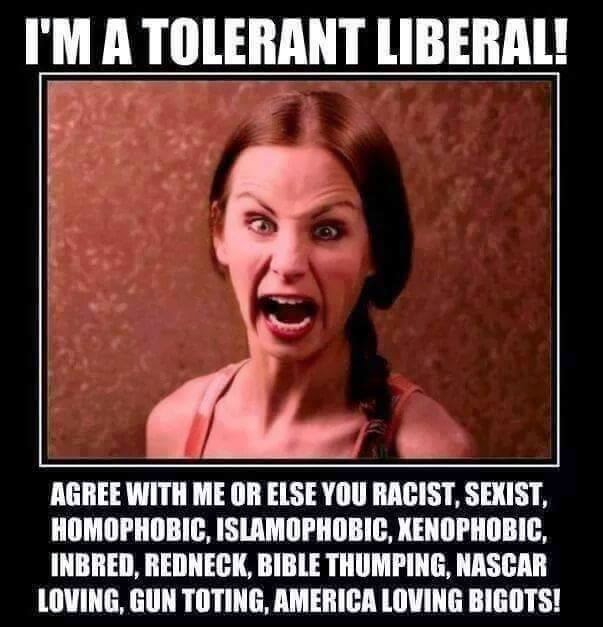 May will be a “Month of Economics” on this blog, and, after all, despite the temptation to respond in kind when one encounters a real-life left-liberal resembling the one in the meme picture nearby, it is good to educate about the basic laws governing our world rather than just argue.

•I’ve begun writing a small Libertarianism for Beginners book for the official For Beginners people (more on that in the second half of the year!).

•You can now catch me daily on the online-TV political panel show The Run on BENnetwork.com (and more specifically, at that link).

•And I’ll be the inaugural guest on Jim Melloan’s The Truth & Freedom Show at RadioFreeBrooklyn.com -- just click on the big red Listen Live button on Thur., May 14 from 6-8pm.

But today is May Day, and to show my newfound sense of balance and objectivity, let me begin by confessing that communists aren’t the only stupid people on the planet. Yes, I see that an Objectivist former head of the Ayn Rand Institute, Peter Schwartz, has written an article declaring libertarians the real threat to liberty (they’re not all hawks, and they’re not all Objectivists, QED, thinks the oaf).

Libertarians like the Objectivists (whether or not they like to be called libertarians) almost deserve the constant torrent of attacks we all now get from the anti-libertarians at places like Salon and Demos, who seem to have spun a hundred articles out of a brief, inaccurate description of libertarianism they read on a discarded 3x5 card in college.

So often both sides in an argument are, if not equally wrong, at least both flawed enough to keep them denouncing each other for eternity, whether it’s the analytic-Continental schism in academia or cops and violent mobs like this one (which barely get reported and result in few arrests, keeping crime stats deceptively low). Let us strive anew to rise above (albeit not so far above that we become like the 145 shameful intellectuals who can barely tell the difference between the Charlie Hebdo staff and the murderers who attacked them).

1. It may be best to skip all culture wars, since culture is messy and sometimes subjective, and stick to the objective things, like science and econ. Philosopher John Tomasi’s hope in his book Free Market Fairness was, very roughly speaking, an effort to rise above the battle between (individualist, free-market) classical liberals and (more statist, fairness-seeking) modern- or left-liberals by suggesting that there are enough benefits to individual development to be found in the marketplace that we perhaps ought to consider property rights, at the very least, part of the mix of protections that an individual in a democratic, liberal society ought to have in order to flourish and shape her own identity.

It’s not just a cold-blooded profit-maximizing calculus but a matter of self-expression like the freedom of speech.

2. Of course, in the gritty, grotesque real world of partly-liberal, partly-corporate, mixed-economy politics, you get things that look like Hillary Clinton (so anti-individualistic and corporatist that she’s gone to the trouble of explicitly telling the world she’s a “Progressive,” not a “liberal”).

3. That’s what makes me think that Tomasi, for practical reasons, ought to be more staunch in his defense of fundamental, strong, anarcho-capitalist-style property rights. Sure, when I read Vol. 26 No.s 3-4 of the journal Critical Review, made up of criticisms of Tomasi from Marxists, social democrats, and others, I’m tempted to spring to his defense and say he’s fighting the good fight -- but might he instead be surrendering the good fight by insisting on conducting that fight on the turf of the social democrats et al?

Most sane people long to be seen as reasonable, moderate peacemakers instead of extremists, but I am haunted still by Tomasi’s description of political philosophy occurring on two banks of a broad river: On one side, the classical liberals, the modern liberals, social democrats, and numerous other more or less mainstream thinkers, all in conversation with each other. On the other side, nearly alone, anarcho-capitalists, who think it is wrong to construct a state of any kind and view the opposite bank as engaged in endless haggling over what form oppression should take.

Tomasi’s book can be seen largely as a description of how lonely the anarcho-capitalist bank is. All I can say is, the other bank, including its classical liberals and minarchist libertarians, is, plainly, the statist bank, and why exactly would we want to encourage humanity to live on that violent, endlessly combative shore? I can think of no better reason to discard minarchism and classical liberals (or rather, politely go beyond them) than to imagine seeing the horror of that statist riverbank from the peace of the opposite shore.

Come on, swim on over here where people are free.

4. I fear, of course, that the overall “liberal-tarian” (broadly defined) plan for victory is preemptive surrender, of course -- constant fretting that we may be too free-market, even as Canada begins outstripping us in that department.

5. One liberal-tarian told me privately that he believes teaching humanity econ is a lost cause and that we must therefore ingratiate ourselves with believers in “social justice.” That certainly appears to be the “join ’em” strategy the liberal-tarians are following. Maybe the impulse to appease will save them -- and will save people like David Simon, now an open Marxist and creator of The Wire, from the wrath of the violent mobs in Baltimore.

6. But neither markets nor politics should be a mere popularity contest. Show some backbone and at least begin by describing what is best, not what you think the other side wants to hear.

7. So-called cultural Marxism (or p.c.), lately the favorite tool of the social justice advocates, is not a friend to liberty any more than the economic kind of Marxism is. It’s just a backdoor route to totalitarianism, and you know it. That‘s exactly why many of its increasingly angry advocates like it.

8. Hitler, of all people, said youth must be infused with a spirit of social justice, the longing to rectify historical injustices (mainly the rise in influence of the Jews, to Hilter’s way of thinking). This is not the way people wanting simple, everyday civility frame culture.

9. Encourage a passion to rectify even dubious or unproven wrongs and you end up with people wanting to believe things like the UVA, Lena Dunham, and Columbia rape hoaxes (yes, the Columbia mattress-carrying case has also fallen apart, in case you didn’t hear). There’s a cultural-trendy reason these cases become very high-profile despite the facts behind them not adding up.

And there will be no mercy for the innocent from those righting all of history’s wrongs if there are no real villains handy.

10. Still, saying the world is nuts is not the same as saying it’s monolithic or lock-step in its left-liberalism, and even the New York Times is paying for dirt on Hillary Clinton lately.

11. Not that the past was without its infighting. Here at the Top Ten Roman Insults.

12. I for one am just glad that with the cultural tumult over transgender people rising to a crazy crescendo lately, it climaxed with something as confusing for average partisans as Bruce Jenner coming out as trans and Republican on the same night.

Does this mean by the “trans”itive property that libertarians sort of get Kim Kardashian and Kanye, too?

1. Our little civil wars are often tragic and unnecessary, whether it’s Avengers: Age of Ultron leading inevitably to next year’s (untrustworthy industrialist!) Iron Man vs. (self-sacrificing patriot!) Captain America scuffle in the film Captain America: Civil War, or half the cast wading into political controversies just prior to the film’s release by storming out of an interview, using the word “slut,” or denouncing fracking. Let‘s stay focused on the killer robot army, people.

2. I just hope the movie is at least as entertaining as this very brief episode of Axe Cop, written by an actual five year-old.

3. Meanwhile, former Marvel executive turned liberal pundit Rick Ungar notes a political development that might be called “Ron Paul’s revenge.” The Republicans were so keen to write restrictive nominating rules that prevented Paul’s name even being put into contention at their 2012 convention that next year no one may be eligible.

4. I have been critical of Joss Whedon at times, but I still trust his judgment enough to wonder what it was about the abandoned original script for this summer’s Ant-Man that makes him fear Marvel abandoned what could have been their best film.

5. In the real world, of course, people don’t exactly have superpowers, but some can do things like this.

6. Seeing fans react with such worry to the Batman v Superman trailer sort of amuses me, since if it looks too dark, it’s really just because of its faithfulness to The Dark Knight Returns, a comic those same fans purport to revere.

Of course, I’m so geeky, I probably derive as much pleasure from things like the depiction in this week’s Justice League #40 of the Anti-Monitor prepping to battle Darkseid amidst a once-more fraying reality.

7. I like the photos of the film Joker as played by Jared Leto, too. Manic these days ought to mean a dash of punk, not just fop.

8. If he’s too scary for you, though, you might enjoy this cutest-ever critter video AND this one in which a cat reminds us that with great whapping comes a great victory AND this one of cats fighting bananas AND this fine cat-massages-dog video AND this one that makes me wonder if people see it and think not “How skilled!” but rather, “Oh, I guess you don’t really have to be that bright to skateboard!” AND finally one proving ferrets love to frolic in styrofoam (h/t Margaret Scobey Austgen).

9. Yet when a herd of beautiful buffalo gets loose -- on the opposite end of New York State from Buffalo -- cops shoot and kill them all. That’s just what cops do, I suppose. It’s their nature.

10. Back to kids’ entertainment next time, with a blog entry inspired by an old acquaintance of mine writing a book for kids about being a homeschooler-type.

11. And don’t forget me on Jim Melloan’s radio show, per the link at the top, which might well touch on mindblowing things like A.I. (I have no idea, really).