16 Links for “Inventing the Individual,” Contemplating Religion, and Surviving Modernity 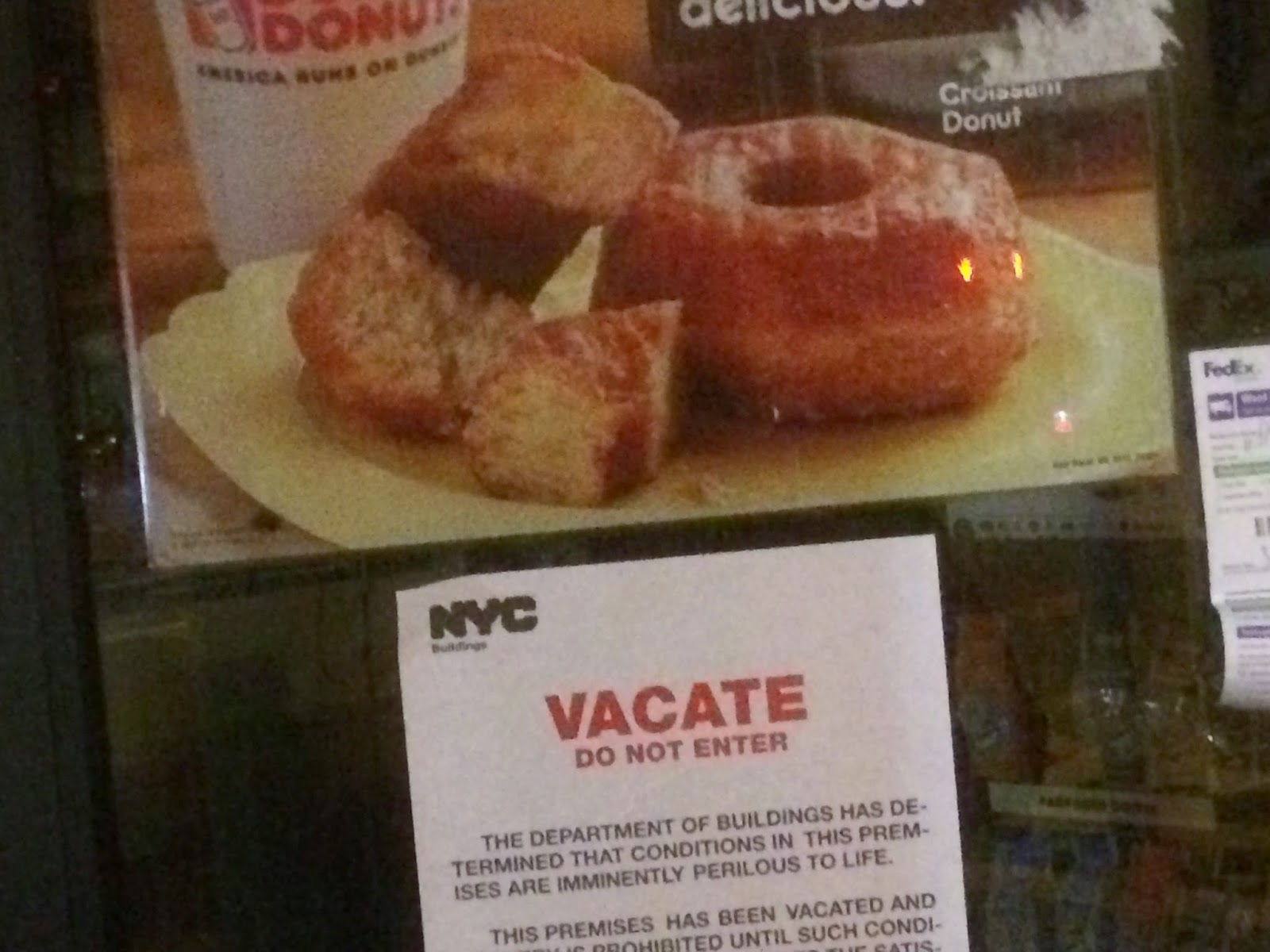 Sixteen brief notes on religion, tribalism, and science for this weekend of Good Friday, Passover, and Easter.

1. First, since we atheists get accused of lumping all religious people together, let me assure you I don’t think the people celebrating those holidays this weekend are the moral equivalent of the mass-murdering al-Shabaab movement attacking Kenya this week. I mean, you’re still wrong, but you’re not al-Shabaab wrong.

2. And unlike some of my pro-science, skeptical, libertarian-or-progressive colleagues, I realize modernity and its scientific comforts are sometimes oversold. I mean, look how dangerous my local Dunkin Donuts is -- “imminently perilous to life,” if we believe the sign in my nearby photo.

3. Driving is also insanely dangerous and may be looked back upon as a mistake by robot-chauffeured future generations, albeit at times a hilarious and spectacular one.

4. And, though you’re damned if you do and damned if you don’t when arguing with religionists who accuse you of being dogmatic, I even concede the logical possibility that supernatural or paranormal phenomena could turn out to exist. Strong Bad, at least, has come again after six long years without an e-mail short.

5. But should I accept the thesis of Larry Siedentop’s 2014 book Inventing the Individual: The Origins of Western Liberalism, which is that Western individualism (which I like, of course) is fundamentally rooted in and a historical outgrowth of Christianity?

In a way, it is the very earliest part of the book, describing the ancient, pagan, pre-Christian world, that may be the most persuasive part, though this was not really the crux of Siedentop’s argumentative plan. Like a good sci-fi fan/philosophy buff, I think it’s healthy to be reminded how utterly alien the world could be if things had gone a bit differently, and the world before the rise of the Roman Empire, as Siedentop sketches it, is one in which each household, contrary to the communitarian picture sometimes painted by nostalgists from Karl Marx to the Republican Party, is nearly its own moral universe.

You think we have a patriarchy now? Be grateful we no longer live in a world in which Dad is the paterfamilias who wields the power of life and death over family members and household servants, is the high priest of the household religion and ambassador to the household gods/ancestral ghosts, and is himself a sort of god-in-waiting whose soul will literally join others beneath the hearth fire when he dies. That’s some serious manly responsibility.

A glimpse of that strange world will leave liberals, conservatives, and libertarians alike breathing a sigh of relief when Greek philosophy, Christianity, and modern notions of rights successively arise -- though there are some on the very far right, mainly in Continental Europe, well aware of Christianity’s role in fostering liberalism and thus opposed to Christianity, believe it or not.

To most modern readers, even the world of feudalism, strange and ornate as its rules are, looks more familiar than the world of ancient household gods. For instance, I may not believe in Marxist class analysis or feudalism, but even our rough ability to map one onto the other and thereby talk about broad swaths of rich and poor medieval citizens is a step closer to home and away from the world of ancient slaves.

Christianity is liberalizing in Siedentop’s story, though, for reasons that very much lump together individualist classical liberalism and statist modern liberalism: As appeals to a single moral law centered on God or the Pope or the monarch became more common, emphasis on hierarchical and hereditary local traditions often gave way to the belief that the law applied to “all souls.” Centralization, individualism, and egalitarianism may all fight furiously against each other in our modern minds, but they were all bundled-together novelties back in the days when many people assumed entirely different sets of laws and moral rules applied to, say, serfs, Gallic monks, German warriors, immigrant slaves, and so on.

Ironically, though churches very clearly fall into the middle realm of “intermediary institutions” (between the individual and the central state) in today’s society, Christianity’s biggest effect in Siedentop’s medieval narrative was arguably the weakening of (older) intermediary institutions. The very idea of a universal natural law was a radical condensing of Greek, Christian, and modern notions that greatly influences us still. If your neighbor insisted that his ancestors conferred upon him the right to take your sheep, you might increasingly refer him to the widely-known laws of God and the king instead of just consulting the locals, long story short. Property was increasingly seen not just as a product of history but as an expression of individual will.

Along with this change, argues Siedentop, came a subtle shift from the centrality of fatalism to hope -- and admiration for the egalitarian model provided by monasticism. And, as I’ve often noted, feminism may bash the conventions of courtly love now, but they were a nice formula for creating civility toward females compared to some of the alternatives -- and still popular in many quarters. As the harsher and more patriarchal rules of Islam are increasingly imported to Europe today, Siedentop thinks we’d do well to stop bashing religion-in-general and, paradoxical as it sounds, see secularism as an outgrowth of Christianity, an outgrowth on more stable and lasting grounds if we acknowledge its pre-secular roots.

In what might be called a “progressive conservative” way (if not for the danger that that label would lead to me be mistaken for a Canadian), I’m more inclined to think that religion was, as Christopher Hitchens once put it, “a decent first draft” and that we can do even better in the future -- but unlike some leftists, I don’t want our pre-scientific roots ignored, denied, or treated as a mere enemy. Christianity helped.

6. And I’m certainly not one of those people (like more than a few young leftist-atheist types) who think humanity was mostly-irrational in the past and is mostly-rational today. We still have our taboos, as Patton Oswalt was reminding people on Twitter a few days ago.

7. But today’s taboos, despite what the feminists tell you, are far from enforcing the old paterfamilias. Today, YouTube takes down things like masculinist user RedPillPhilosophy’s video of feminists physically attacking men, apparently calling it “hate speech” not because the men are being harmed but because the women end up looking bad.

8. Undermining the old paterfamilias formula hasn’t made the world hunky-dory, after all. Beloved sensitive liberal guy Tom Hanks is the dad who raised this thug, for example, so something went wrong with that approach.

9. Relations between the sexes are now sufficiently confusing that Gavin McInnes is reduced to interviewing a woman about what women are like.

11. But even if you applaud most recent changes in culture, you should reject recent growth in government. Nowadays religion isn’t the big threat to scientific advancement, regulation is, Peter Thiel argues.

12. And if many on the left still think of themselves as promoters of progress even while trying to squelch novel business ideas like Uber, I wonder if they’ll at least feel a moment of sympathy for Uber while watching this out-of-control cop badmouth an Uber driver.

13. I can reject governmental controls (right and left) and admire science and technological progress, as did my very funny and nerdy high school biology teacher, who has passed away. Robert Ochs was, as I recall, a libertarian, an occasional mocker of the ignorant, and an early adopter of all-in-one remote controls for the modern home -- when not taking vacation/astronomy field trips to Jamaica. He is missed.

14. Science is sometimes seen as arrogant in its pretense of objectivity by admirers of religion (and vice versa), but sometimes science unsettles you by making you realize how bad your brain is at registering reality objectively (h/t Austin Petersen).

15. This video (h/t Justin Stoddard), a bit like a cartoony seven-minute fusion of Jonathan Haidt’s warnings about “the righteous mind” and Richard Dawkins’ descriptions of ideas-as-memes, reminds us partisanship and passion carry dangers even online.

16. For useful models of navigating pluralism and heresy, come back to this blog in the next couple weeks for looks at books by Jacob Levy and Christine Caldwell Ames -- and catch me onstage at the PIT 6pm (not 7!!) April 18 surrounded by liberal comedians. I may mock your religion and your government.
Posted by Todd Seavey at 1:31 PM

Whether you're writing your first resume or tenth, no one is immune from making a mistake or two. basement renovations atlanta ga