One Perverse Link for Each Hour of V-Day (with Seavey, Lucy, et al on UFOs)

Click one of these depraved links per hour to keep yourself entertained on Valentine's Day if it goes slowly, and at the bottom find the link to the lengthy video chat I participated in about UFOs.

1. Amber Heard, the hot young Objectivist atheist actress lauded for coming out as having a girlfriend at a GLAAD Awards event (including by a few gay activists overly quick to label her lesbian instead of bi), and who co-starred with Nic Cage in Drive Angry 3D and acted in the modern classic Machete Kills, married Johnny Depp last weekend on his remote private island. That must disappoint someone somewhere, likely a female someone, political and sexual orientation…uncertain.

2. Brown science news in more than one sense, though: from Brown University comes the news that transplanting a fat person’s feces into your digestive system can actually cause you rapidly to become obese, which may give some patients second thoughts about ingesting fat people's shit (h/t Diana Fleischman).

4. But maybe your more natural source of joy is being…smothered by bunnies!!

5. And this is probably the cutest bunch of pussy holes on the Internet!

7. Who would listen to those accused of rape? Well, people who take criminal defense seriously, for one.

9. The cruelest of lovers, though, is DC Comics, which -- literally a week and a half after publishing a (Grant Morrison-written) guide to their whole multiverse -- basically announced it's all meaningless and that starting in June they will ignore fictional continuity and just tell whatever ostensibly-hip new stories they like, in whatever style they want (it's like Hypertime forever, for those in the know). I'm reminded of some wag's clever metaphor that DC Comics' main m.o. is to take your memories hostage occasionally and then ransom them back to you.

10. Kitties don't insist on forcing stories into tidy boxes -- but they like boxes because they feel less cold and stressed in them.

11. This stressed cockatoo imitates with disturbing, uh, fidelity the arguing of the divorcing couple who once owned it.

12. Even more alarming animal imagery (h/t Morrus): these near-identical Spectre and Hydra symbols (and if Hydra is secretly S.H.I.E.L.D., might Spectre secretly be MI6 -- for that matter, isn't S.H.I.E.L.D. pretty obviously the real NATO headquarters in Brussels known ominously as S.H.A.P.E.?). 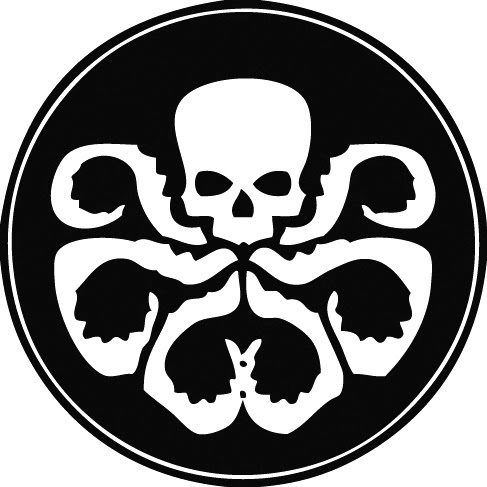 13. Back home, this preschool for adults is the kind of thing that prevents me fully loving New York.

14. But here’s a union of two things I truly love: a (fake) Star Trek vs. Star Wars trailer.

17. In other animal fun, the disgraced anchor Brian Williams claims he saved a puppy -- or was it two? -- from a fire. Lying psychos like him being in charge is the norm, America, not an exception. Recognizing that is Step One.

18. Skip Jupiter Ascending, by the way. Maybe you should see the comic-book-based (violent yet fashionable) Kingsman this weekend instead.

19. Speaking of Matthew Vaughn films, Chloe Moretz turned eighteen on Tuesday, so I guess she’s safe from royalty and billionaires now, but pedophiles aren’t the Clintons’ only dubious associates (important reminder: I’m against royalty and aristocracy just as I’m against every other form of government or coercion or tribalism; don’t let my mild traditionalist tendencies fool you).

20. But we don’t need the decadent elite to have fun -- let’s see how many capybaras fit in the hot tub (h/t Charles Hope)!

21. And when decadence really leads to emotional disaster, we end up with something like Roger and Francine’s cover stories when they pretend to be a feuding couple in this scene (Albee all right in just a minute, you might say) on a very special American Dad.

22. Speaking of “Civil War,” it’s great Spider-Man is in the film next year, but it would be sick and wrong to squeeze in all the characters from Marvel’s original comics plotline -- so I’m hereby going to guess the stripped-down plot (following both from Avengers: Age of Ultron and the earlier Captain America: The Winter Soldier and using all the actors reported to be attached to the project so far) is something like: Cap’s pals who hope to redeem Winter Soldier vs. jaded characters who cannot trust him, like so: Capt. America, Falcon, Winter Soldier, and Black Widow vs. (respectively) Iron Man, Black Panther, Crossbones/Grillo, and Spider-Man.

23. Let there be no fighting at tonight’s Liberty Island launch party, for the site built around creative-writing libertarians and their ilk.

24. Finally, I video-chat with Lucy Steigerwald and associates Meg Gilliland, Zach Fountain, Seth Wilson, and skeptical Dan Bier about space aliens, favorite creepy ideas, and why the UFOs aren’t quite as simple a matter as we skeptics might at first think (but Mila Kunis is probably not from outer space; not sure about the Wachowskis or Scientologist Laura Prepon).

And if you feel we gave cryptids short shrift in the discussion (despite the Mothman shout-out), here’s more convincing than usual footage of a quartet of possible Bigfoot -- or of course extremely tall, long-armed hoaxing engineering students -- traipsing near an automatic camera in Yellowstone.
Posted by Todd Seavey at 8:37 AM

DC Comics is taking a step away from centrally planning their stories, but I would go further. They should drop all of their titles (Batman, Wonder Woman, Detective Comics, etc.). Just hold onto a store of copyrighted characters, and license them out to writers and artists. Let creators establish their own continuities or just write one-off stories. DC Comics can publish what they like, filtering for quality, and the market will decide which continuities survive. When a continuity is fully mined, sales will drop and DC can stop publishing it.

DC should do the same thing for movies, too. Instead of having one Batman film every few years with a huge budget, they should be handing out smaller checks to more directors with different ideas. So in one year you could have a 40s Batman movie, a Frank Miller Batman movie, an Adam West-style Batman movie, etc. Let a thousand Batmen bloom.