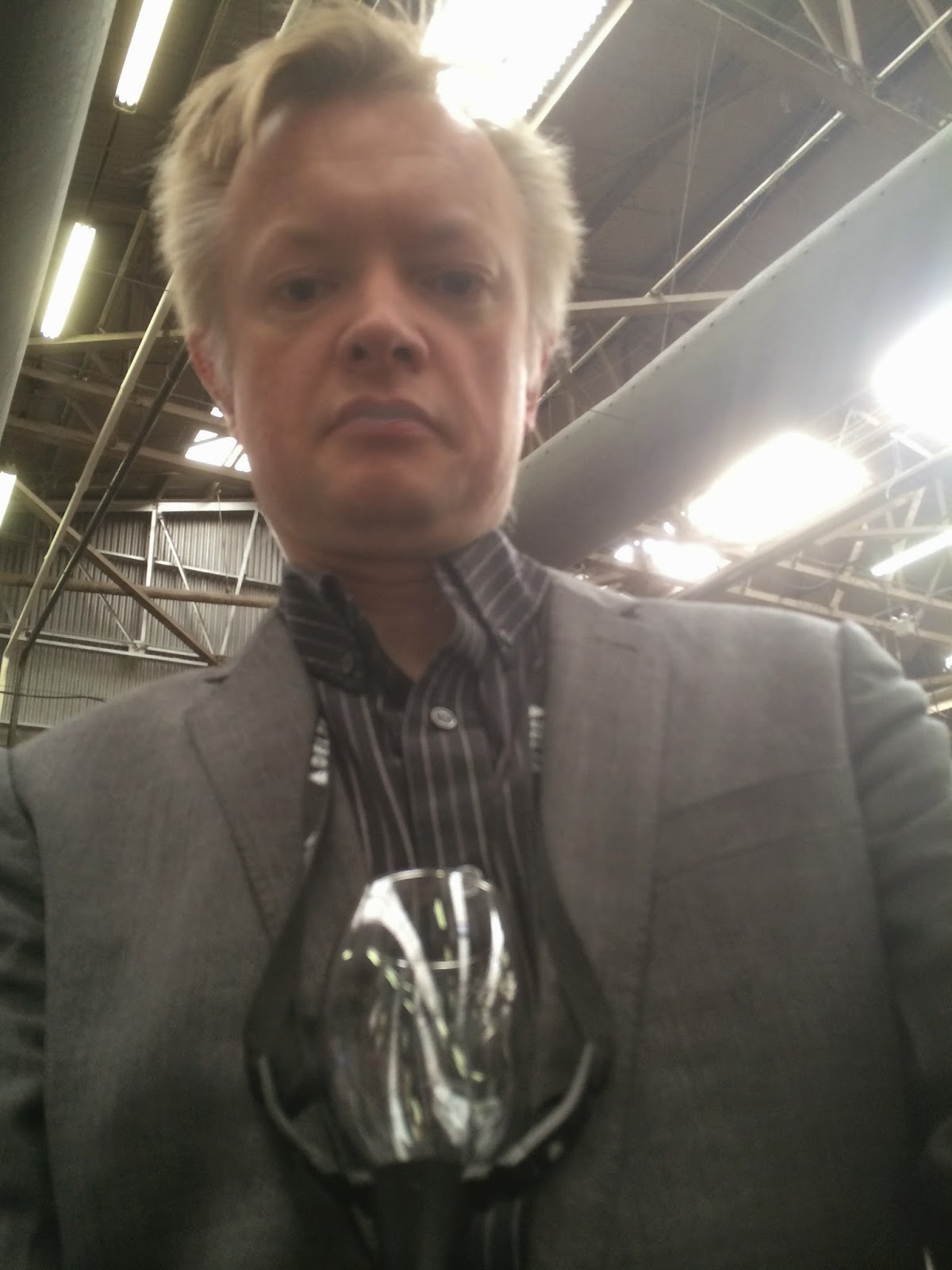 That’s me in the photo, looking bleary and wearing a strap-on wineglass at the recent New York Wine and Food Festival, which I attended thanks to Allen Salkin, meaning that I cannot pretend to be fully objective when I urge you to pick up his now-in-paperback volume From Scratch (I bought two!) about the colorful, flavorful, tumultuous history of the Food Network.

Of course, cuisine itself is pretty subjective. Even professional wine critics can be duped into fawning over cheap wines if told they’re super-fancy, apparently. A recent experiment involving organic food experts showed they can be duped with comparable ease into praises pieces of McDonald’s food. The power of suggestion permeates all things, though snooty rich tastemakers and frowny-faced government inspectors, for example, will not admit it.

Even the cold, hard facts of life aren’t so clear cut once political judgments (inevitably) color their assessment.

•Is ebola overblown or, since NYC just today reportedly got its own ebola patient, should I view these as the final good days before civilization fell apart?

•Was the cop who shot Michael Brown in Ferguson the first cop of many there to use excessive force or, as the official police report and autopsy now suggest, a man reacting reasonably to a cigar-stealing, shopkeeper-assaulting, cop-car-rushing, drug-crazed, six-foot criminal powerhouse (as seven black eyewitnesses, reportedly terrified of being publicly identified and vengefully attacked by pro-Brown mobs, apparently say)?

(And while we’re at it, while believing everything cops say is far from wise, it was shameful the way columnists even at some prominent publications began eulogizing Michael Brown as a peace-loving, harmless youth even with evidence to the contrary. And I say this as someone who wants to abolish the Department of Homeland Security and end the drug war, not some fascist who wants the streets to run with blood. More than one columnist pointed as vindication of Brown to the fact that the store he appeared to have robbed never pressed charges -- though given that the “protesters” burned down at least one other convenience store that they thought was the one Brown targeted, I’m not surprised the real store opted to stay out of the whole conflict. This week, other “protesters” in Ferguson, responding to the police report, raided Walgreens, the true locus of evil, apparently.)

•Shouldn’t it be harder to jump over the White House fence than the latest such incident, this week, suggests it is? Or should we be delighted government is so inept it can’t even protect itself, let alone us?

•Does Keene, NH really need Homeland-subsidized military-style vehicles to cope with its notoriously radical libertarian population, as was once suggested by police there, or, as this week’s ruckus there suggests, just to cope with its pumpkin festival crowds? (Seriously, though, as is so frequently the case, it sounds like cops tried to hem people in, turning what could have been a loose agglomeration of individuals departing the area into a dense impromptu phalanx of anti-cop rioters. Do the authorities really not see that that self-fulfilling dynamic happens time and again?)

The world of political ideology, by contrast, ought, you’d think, to be neat and tidy and idealized -- the realm of philosophers -- but even there, it’s unclear what constitutes evidence and proof and what our litmus tests should be. And (as I often find myself thinking) it’s not even close to clear what the “default” or “neutral” position should be when one is uncertain about politics or philosophy. Democracy? Anarchy? Status quo? Tradition?

That ambiguity-about-ambiguity is the topic of the twenty-fifth-anniversary issue (and many before it) of the political philosophy journal Critical Review (Vol. 26, No. 1-2). In particular, the academics contributing to the issue wrestle with whether there are even any obvious implications from public ignorance for democracy. Is the “correct” result in a democracy whatever the public comes up with? What an informed public comes up with? What the most expert members of the public come up with? Do we even acknowledge that each of these groups can make disastrous mistakes, or will we pretend whatever the process produces is vindicated by the process? And how do the kinds of errors different segments of the populace make differ (petty grudges among the masses, perhaps, and overblown schemes among the brainy experts?)?

Faced with so much uncertainty, I should really take that long-overdue break from the Net and curl up in a ball for a few months, wracked with doubt (or at least squirreled away doing some ghostwriting). But before that: a look back at what I think may have been learned since this blog was launched, and a few entries with video and music links, coming up.
Posted by Todd Seavey at 5:14 PM