1. A simple A.I. program a while back “learned” from observation that Internet users love cats.  And Google bought Boston Dynamics, the robotics company that makes those walking Big Dog robots, among other things.  I think there might be potential for a cybernetic cat vs. dog war in the future.  Or at least a “story by” credit for me.

More likely, Google’s even more recently acquired DeepMind A.I. company will lend its name to the post-singularity super-sentience that ends up enslaving us all.  We’ll see.  Soon.

2. If old ways are being replaced by new, it’s fitting that a cattle rustler was the first guy arrested and jailed with a drone.

3. Cruelty to animals is not cool, but the violent dog imagery in this old Beat Farmers song, played daily by a radio station in Providence years ago, is comedically essential.  (Next year marks the twentieth anniversary of lead singer Country Dick Montana’s death.)

4. Luckily, cats and dogs can get along sometimes and flourish.

7. And this kitten enjoys fighting a toy octopus.

8. But watch out for the “drunk octopus” in the nearby photo (h/t Virginia Vitzthum). 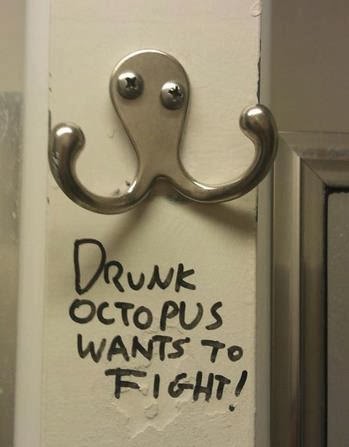 9. Instead, why not buy some My Little Brony action figures (h/t Matt Brandenburgh)?

10. And with this item, Daniel McCarthy says “the Internet is complete.”
Posted by Todd Seavey at 1:03 PM