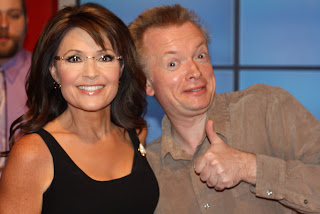 As some of you know, since my last blog entry, two months ago, I've been helping to draw media attention to a loose woman who thinks pale, blonde, libertarian guys and Australians are sexy.

I mean, of course, Tracy Quan, the call girl turned Daily Beast columnist (and 3 Quarks Daily semifinalist), who appeared on FreedomWatch while I worked for that show -- and who has now declared libertarianism-influenced, Australian political hacker Julian Assange, founder of WikiLeaks, dangerously sexy (and I HEREBY DECLARE JULIAN ASSANGE THE TODDSEAVEY.COM MAN OF THE YEAR).  Quan notes that Jonah Goldberg almost sounds like he wants Assange dead for his leaking (info-wise, not condom-wise).  Given my purported resemblance to Assange (see photo #4 in the column about him linked above, for instance), I'd better duck Jonah for safety's sake until this scandal blows over.  (Speaking of political look-alikes: was it a bad sign, in retrospect, that Carl Paladino looks like his fellow offbeat Republican Dennis Hopper?)

Nowadays, I only know what I hear from the guests themselves or indirect sources, like any ordinary civilian, but I think you can catch Quan on FreedomWatch again this coming Monday (Dec. 20, 8pm Eastern, Fox Business Network), along with my friend Michael Malice, both of them talking about their body issues, by which I mean defending the legal right to do with your body as you choose, whether it's prostitution or "ultimate fighting" (about which Malice co-wrote a bestselling book).  Tonight's FreedomWatch sounds good, too: an hour-long talk with editors from Reason about the definition of libertarianism.

And speaking of people who were on FreedomWatch while I was working there: yes, that's really Sarah Palin next to me in the photo above.  Plainly, I have upgraded to a whole new class of conservative female since my last entry.  (Much has changed for the better in the past two months, gentle reader.  Keep reading in the days ahead as I explain -- and as I resume cleaning up and enhancing this site.)  But if Palin isn't ideologically pure enough for you -- and if Christmas strikes you as an assault upon rationality -- click here and scroll down to see a photo of Dagny Taggart herself, standing on train tracks, from the upcoming film Atlas Shrugged: Part One.  In theatres April 15.  Really.  (And if you need something more nihilistically anarchist, Dimitri Cavalli draws my attention to the V for Vendetta symbol plainly visible in this week's footage of a suicidal -- and failed homicidal -- gunman in Florida.  Peaceful solutions, people, please.  And Dimitri himself may be Catholic but is not the Guy Fawkes type, I'm pretty sure.)

I'll begin giving more details tomorrow, but the past two months have given me chances to chat not only with Palin but also Kurt Loder, ex-VJ Kennedy, S.E. Cupp, NYPost crime reporter Phil Messing, parade-loving libertarian campaign advisor Roger Stone, and many more -- and to attend events such as a debate over Robert Moses and Jane Jacobs featuring Richard Sennett and Roberta Brandes Gratz (on the same night that I saw Pretty in Pink star Andy McCarthy hanging out at Lolita Bar, in fact), about which, more next week.

Good times -- though the Palin FreedomWatch appearance shown above (during which she looked lovely in a black dress falsely identified as a tank top by HuffingtonPost) did make me nervous at one point: when host Judge Napolitano asked Palin if she shared Orwell's fear of new-fangled words deployed for political purposes.  I'd swear I detected just a hint of fear in her face, as though she were about to be asked about neologisms such as "refudiated" instead of terms such as "quantitative easing."  But she was stellar anyway -- and I dare think she's getting more libertarian as time goes by.

Here's hoping the whole world does, starting with the maybe-redeemable Republican Party (that's why Human Rights Day last week saw me attending a dinner featuring libertarian Republican Gary Johnson, as I will again after I speak at the Republican Liberty Caucus on Feb. 12 -- but this mission to liberate the planet is just getting started, so I'll say more tomorrow and on many days thereafter).
Posted by Todd Seavey at 8:43 AM

If one wishes to measure how libertarian Sarah Palin is one needs only ask the question "Do you support the immediate legalization of marijuana?"

The response will temper your hopes that she is more libertarian.